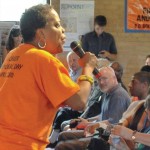 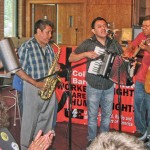 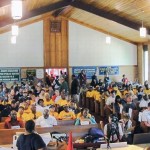 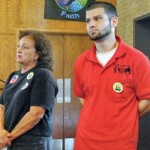 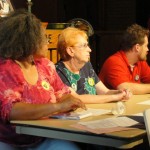 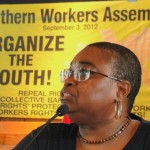 Charlotte, N.C. — Over 300 Southern workers, trade unionists and community allies gathered for the Southern Workers Assembly on Sept. 3, Labor Day, the opening day of the Democratic National Convention. The Wedgewood Baptist Church was packed and supporters had to stand beside the pews. There was a feeling in the air that Southern labor was uniting to forge a historic new direction, towards rank-and-file-led social justice trade unionism, particularly to challenge right-to-work (for less) laws and combat racism.

“Southern workers cannot wait for the Democratic Party and certainly not the Republican Party, to enact some progressive labor laws before we can begin a serious effort to organize ourselves into a labor movement,” stated Saladin Muhammad, director of the United Electrical Workers Union’s Southern International Worker Justice Campaign, in his opening remarks. “Unfortunately, this has been a serious error on the part of the U.S. labor movement for too many years.”

The Democratic National Convention was being held in North Carolina, the least unionized state in the country, and one of only two states that outright denies public workers the right to collectively bargain. Many in the union movement, particularly those from northern and more unionized states, have been saying that the convention should have never been held in a right-to-work state. In return, labor did not invest the millions of dollars of funds that they typically make available for the DNC. The International Brotherhood of Electrical Workers and the AFL-CIO organized a major counter rally in Philadelphia in August, yet there was little to no discussion about a strategy to unionize the vastly unorganized Southern region.

Ashaki Binta, who organizes public workers with the United Electrical Workers union in North Carolina, and Justin Flores, organizer with the Farm Labor Organizing Committee, gave opening presentations. They focused on four main obstacles that work to impede the struggle against racism, sexism and working-class exploitation in the South and that also severely inhibit the growth of unions: 1) the Taft-Hartley Act, which directly undermines the growth and consolidation of unions, 2) the fact of the U.S. South being the number one region in attracting foreign direct investment (FDI), 3) the prohibition of collective bargaining rights for public sector workers and 4) the unjust Immigration policies targeting undocumented workers.

They pointed out that 32 million workers in the U.S. do not have collective bargaining rights. Additionally, they noted that the Southern states incentive packages offer companies, domestic and foreign, a nonunion environment. The Southeast has received the highest dollar amount of foreign investment of any region. The Southern states’ tax policies have changed within recent years to impact FDI decisions.

A clarion call for solidarity

The powerful lineup of speakers included three panels. The panel of workers who represent labor formations excluded by the National Labor Relations Act included Baldemar Velazquez, president of FLOC; Victor Alvarez, with the National Day Labor Organizing Network currently on a cross-country tour with the Undocubus; and a formerly incarcerated man from All of Us or None, speaking on ex-felons having the right to a job.

During the open discussion following this panel, Clarence Thomas, an executive board member of the International Longshore and Warehouse Workers Union Local 10 from Oakland, Calif., made very stirring comments referencing Harry Bridges, an Australian-born leader of the ILWU and notable as a leader in the fight against racism on the docks.

Thomas also asked panel member Riley about the ILA’s East Coastwide contract negotiations, which are currently taking place. It appears that the negotiations may be reaching a standstill around the technology questions relating to automation that could eliminate thousands of jobs on the ports. Thomas called for support for the ILA brothers and sisters. Saladin Muhammad then stood up and addressed the crowd, calling for a resolution to be passed to support the ILA. The assembly adopted the proposal unanimously.

During the intermission and during dinner, cultural performances by Jaribu Hill from the Mississippi Workers Center; the Fruit of Labor Singing Ensemble; the band from the Undocubus; and Sergio Sanchez, son of a farmworker, helped keep energy high.

The UFCW brought a powerful delegation of between 20 and 30 workers from the Smithfield plant, who brightened the room with their yellow shirts. UE also brought about 20 workers from North Carolina, Virginia, West Virginia, Pennsylvania and Maryland.

Earlier in the day before the assembly, a few dozen FLOC supporters went as a delegation to a Kangaroo gas station that sells RJ Reynolds-produced cigarettes. This action was to continue to keep public pressure on the company. FLOC is currently engaged in organizing a major campaign to win collective bargaining for migrant farmworkers who pick tobacco for the RJ Reynolds Tobacco Company across North Carolina.

After the panels, workers convened breakout sessions to discuss how to concretely build towards a Southern Labor Alliance. One of the tactics discussed was using a Rank-and-File Workers’ Bill of Rights to help unite certain sectors and win better working conditions. UE150 has done this in North Carolina and was able to unite state mental health workers into a major campaign that drew in many allies over the last three years and got a bill introduced to the state Legislature.

“The Mental Health Workers Bill of Rights gives a core of standards to provide us a safe working condition, benefits and all things that impact us as workers,” stated Larsene Taylor, a healthcare technician at Cherry Hospital in Goldsboro, N.C. and Vice President of UE local 150. “It is like a binding contract without collective bargaining.”

UE150 is also fighting for the passage of a Municipal Workers’ Bill of Rights for city workers across the state. This most recently has helped tie together Charlotte city workers that have struggled for union recognition for the past six years and have been leading a weekly picket, the last four weeks, in the buildup to the DNC.

The United Campus Workers-CWA have also recently followed suit and created a Campus Workers’ Bill of Rights that has helped them to establish a political fightback program for their members, even without a union contract.

Workers vowed to meet again at the Southern Human Rights Organizing Conference at the ILA union hall in Charleston, S.C. on Dec. 7-9 to continue to develop the Southern Labor Alliance. Additionally, workers have vowed to publish a quarterly newsletter to help report on campaigns and struggles of Southern workers to help develop consciousness and tie struggles together.

The writer is a UE150 organizer and facilitator of the Southern Workers in the Private Sector panel.