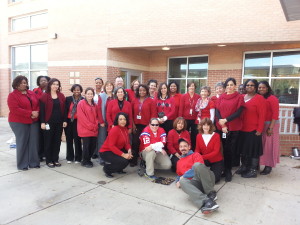 Teacher’s participate in Nov. 4 walk-in before school at Guilford Elementary in Greensboro, N.C.

“It’s time to stop being afraid,” stated Clara Stiers, a Westlake Middle School counselor speaking at a town hall in Apex. “Today is the beginning.”

Workers taking collective action, such as this walk-in, is the only way that working people can defend our jobs, our communities and the vital services that we provide. We must continue to stay organized and support each other in our struggles for democracy in the work place. The initial call for a walk-out teachers strike shows how determined many teachers are to fight for quality education for the students that includes job security for education workers. The walk-ins that were later organized to engage education workers, parents, students and our communities, begins a the direction of forming people’s education assemblies where real educational democracy comes to life.

This action – like many before including the recent fast food and Walmart workers strikes – was a continuation of united struggle for workers across N.C., the South and the entire country. We must continue to meet after work, before work, during lunch and continue to organize actions that bring voice and power to workers. Afterall, we run the schools, the factories, the mental health institutions, the cities and all of society. Should we not be allowed to make decisions about how things are run?

Even in a state without collective bargaining rights for public employees, workers will find ways to organize and express our opposition to bad decisions made at the expense of our lives, our dignity and our communities. We must continue to work to over-turn the anti-worker, anti-student, anti-poor the ban public workers that basic right to a union contract and right-to-work (for less) laws.

On November 1, the Southern Workers Assembly hosted rallies in several Southern cities defending our rights to protest, especially after the conviction of veteran Black labor activist Saladin Muhammad for his Moral Monday arrest. Workers taking concerted action is the best offense against these attempts to attack the right to protest.

The Southern Workers Assembly – composed of workers from across the public sector, in private industry and also farm workers – salute and congratulate the bold and important action of education workers on November 4 to finally take a little power back. We vow to continue to work hand-in-hand with the NC Association of Educators, Organize 2020 and other rank-n-file education workers across the state to help improve schools and our workers rights. We support the work of Public Schools First NC to stop privatization of public education, so that private companies can not get rich off public services.

Education is a right!