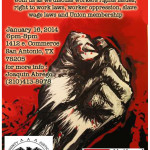 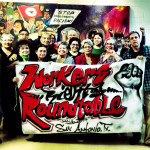 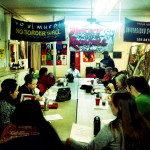 The San Antonio, Texas section of the Southern Workers Assembly convened a workers rights roundtable on January 16, 2014. The roundtable emerged from conversations between the Southwest Workers Union and Julie Rogers of the National Nurses Union. Both organizations were organizing workers in San Antonio and sought to deepen their connections and work in Southern Worker Assembly campaigns. In attendance were Southwest Workers Union representatives and members, National Nurses Union representatives and members, Fuerza Unida, Domestic Workers in Action, and Local 782 of the musicians union. The energy was amazing and participants were extremely cooperative.

Jessica O. Guerrero from Fuerza Unida stated, “This type of gathering is so important to our work. All of us benefit individually from exchanges like these, and our collective efforts are stronger for it. I’m happy to reconnect with some old allies and relieved and inspired that new faces and corazones (hearts) continue to join our work in la lucha/the struggle.” Guerrero continued, “We weren’t sure what to expect from the Workers Roundtable but we came away reinvigorated to continue our work.”

The prevailing conditions of workers in the U.S. South are poor. The roundtable demands an overall improvement of our working conditions. The Workers Rights Roundtable plans to meet bi-annually but participating organizations will continue to work together throughout the year to build capacity and momentum to fight for the rights of all workers, and seeks to launch a Southern Texas Worker Assembly.