Campus Workers United – Communications Workers of America are a founding member of the Southern Workers Assembly. Their recent action in Nashville, Tennessee is an important example of workers taking the lead in spreading the growing mass fight back against the attacks on the working-class and oppressed. The Southern Workers Assembly is committed to helping to spread these type of militant, worker-run actions across the U.S. South. 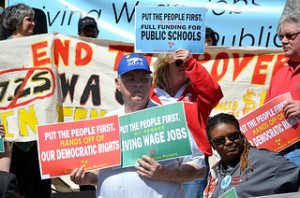 More than 500 Tennessee activists, including CWAers, union members and other allies, rallied in Nashville at the State Capitol for secure, living wage jobs, public education, and democratic rights to organize, protest, bargain and vote freely.

It was the start of a movement throughout Tennessee to “Put the People First,” and activists from faith groups, unions and worker alliances, Jobs with Justice, the NAACP, Citizen Action and many more have come together to form the coalition. At the capitol in Nashville, they rallied, then delivered a letter to Gov.Bill Haslam (R), calling on him and the Tennessee legislature “to make the interests of Tennessee working people your top priority.”

“Our governor, this legislature, and their millionaire backers are trying to destroy 150 years of progressive reforms that the working class has won in our state. But we won’t go backward! And when we stand up and fight back, it isn’t just at a single rally. Today we’re launching a movement to ‘Put the People First!’ Just like our sisters and brothers did with Moral Mondays in North Carolina. And we won’t stop until they give us what we want!”