Thousands of teachers, bus drivers, housekeepers, kitchen and other education workers, along with students and parents from hundreds of schools across the state of North Carolina have been organizing over the past year, starting with the incredible “walk-in” at school flag poles on Nov. 4, 2013 protesting Gov. McCrory and the General Assembly’s massive cuts to public education and attacks on education workers rights. Since then, there has been a flood of rallies and actions by public education supporters at county school board meetings across the state that effectively shut down the 25% contract scheme. Several teachers and students have gotten arrested at the Legislature as part of the Moral Monday movement. NC is 48th out of 50 states in both per-pupil funding for public education and average teacher’s pay. 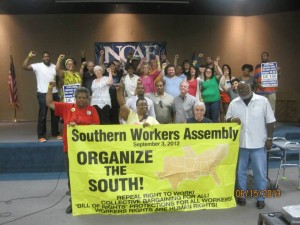 Governor Pat McCrory, State budget Director and retail store mogul Art Pope, Sen. Thom Tillis, Rep. Phil Berger are to blame for the slashing funds for instructional supplies and textbooks, eliminating thousands of teacher assistants’ positions, gutting tenure rights for teachers (making it easier to fire teachers). Now they want to hold a carrot of a minor pay raise over teachers as an effort to eliminate your rights and further erode public schools.

“It’s time to stop being afraid, ”stated Clara Stiers, a Westlake Middle School counselor speaking at a town hall in Apex. “Today is the beginning.”

Workers taking collective action, such as the walk-ins and speaking out at county school boards, and joining the Moral Monday movement is the only way that working people can defend our jobs, our communities and the vital services that we provide. We must continue to stay organized and support each other in our struggles for democracy in the work place. The initial call for a walk-out teachers strike shows how determined many teachers are to fight for quality education for the students that includes job security for education workers. The walk-ins that were later organized to engage education workers, parents, students and our communities, begins a the direction of forming people’s education assemblies where real educational democracy comes to life.

This action – like many before including the recent fast food and Walmart workers strikes – was a continuation of united struggle for workers across N.C., the South and the entire country. We must continue to meet after work, before work, during lunch and continue to organize actions that bring voice and power to workers. After all, we run the schools, the factories, the mental health institutions, the cities and all of society. Should we not be allowed to make decisions about how things are run?

In fact, not only is it teachers but all public service workers, and all workers generally that have seen a major decline in their standard of living and increased work loads. State employees in NC have not seen any real raise since 2008. According to the Economic Policy Institute, from 1983 to 2010 the bottom 60 percent of Americans actually lost wealth, despite the fact that the overall U.S. economy has grown over this same time period,

Even in a state without collective bargaining rights for public employees, workers will find ways to organize and express our opposition to bad decisions made at the expense of our lives, our dignity and our communities. We must continue to work to over-turn the anti-worker, anti-student, anti-poor the ban public workers that basic right to a union contract and right-to-work (for less) laws.

The Southern Workers Assembly – composed of workers from across the public sector, in private industry and also farm workers – salute and congratulate the bold and important action of education workers on November 4 to finally take a little power back. We vow to continue to work hand-in-hand with the NC Association of Educators, Organize 2020 and other rank-n-file education workers across the state to help improve schools and our workers rights. We support the work of Public Schools First NC to stop privatization of public education, so that private companies can not get rich off public services.

At the Statewide NC Workers Fightback Conference in September 2013, we launched the Workplace Democracy campaign and Local Workers Assemblies in regions across the state including Charlotte (Western NC), Goldsboro (Eastern NC), and Durham (Triangle area). These formations can help education workers unite with all other workers in public and private jobs to fight for our common interests, build democracy in the workplace and challenge corporate and government forces to achieve fully funding of all public services and build workers power.

Join us next Monday, June 16 at the Moral Monday focused on labor and workers rights!

Education is a right!