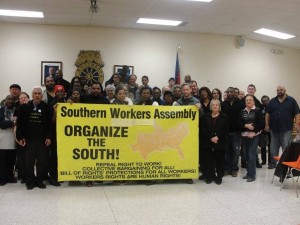 They all came from across the U.S. South to attend the first session of the Southern Workers School. Organized by the Southern Workers Assembly, the school took place March 4-6 in Raleigh, N.C. Seven more school sessions will take place over the next six months to continue to develop an action plan and give workers the opportunity to engage in joint study.

This session of the school had several main objectives, including building a plan, with the worker leaders and rank-and-file activists gathered, to strategically organize workplaces across the region and begin the development of a committed core of activists. This core will study political economy and the organizing lessons of past union and Civil Rights campaigns in the region to inform a strategy where workers can best build unions and workers’ power.

The school was also held to help develop social movement conditions and bottom-up worker activism in order to attract support from international unions and other sources and be able to challenge those among the world’s largest corporations that invest in the region. Net income from U.S. and foreign investments in the South now equals $3.7 trillion, making it the world’s fourth-largest economy behind Japan.

‘For a broad fighting movement’ 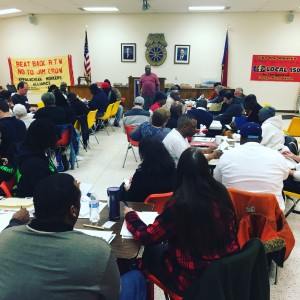 Saladin Muhammad, co-chair of the SWA, addresses school participants on the opening day

“The Southern Workers School is not an event,” stated Saladin Muhammad, of Black Workers for Justice, in his opening remarks. Muhammad is a retired international representative of the United Electrical Workers. “It’s about building infrastructure for a broad, fighting social movement that exposes the capitalist system and to build workers’ power to transform the economy.” Along with Muhammad, Ed Bruno, retired southern director for the National Nurses Union, developed and presented the curriculum for the school.

A school document reads: “The U.S. South is a region where forced labor and a system of racist apartheid were legalized. It shaped a culture of social, economic and political divisions that has made the U.S. South a region of low-wage labor, low union density and political conservatism. Because of the role of the U.S. South in fueling the growth of U.S. and global capitalism, particularly as a region producing the majority of the world’s cotton for the European textile industry during the 18th and 19th centuries, there was an acceptance of the conditions of forced labor and racist oppression in the European countries and developing global economy profiting from the international slave trade and forced labor.

“Rank-and-file workers, especially in the South, need a new orientation and organizing forms that break with business unionism that demobilizes members, bargains concessionary contracts, and aligns with corporate-run political parties.”

The school also sought to connect to the broader social movements, including the Black Lives Matter movement and against racist police killings. In the week before the school, a 24-year-old Black man, Akiel Denkins, was killed by a Raleigh police officer, and several demonstrations took over the streets.

‘About more than getting paid right’ 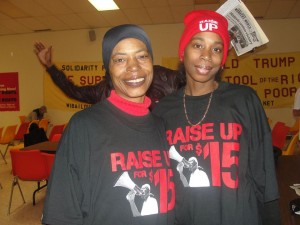 “I lived through the 1960s,” stated Rolanda McMillan, a fast food worker from Richmond, Va., with Raise Up. “It’s about more than getting paid right. It’s about, am I gonna get killedtomorrow by a cop because of the color of my skin? Am I on a terrorist list because I am a Black woman?” McMillan also testified about being fired from McDonald’s for going on strike for $15 an hour and union rights, but later winning her job back after her co-workers, the community and Raise Up pressured the company.

Professor Patrick Mason from Florida State University led two major sessions about the political economy of the South. Mason’s presentation focused on the role of chattel slavery in shaping the economy here, including the continued repression that Black folks have faced in the region since abolition: the counterrevolution after Reconstruction, Black codes, sharecropping, Jim Crow, segregation, mass incarceration and overpolicing.

So-called “right-to-work” (for less) laws were enacted in the South to maintain segregation in the workplace and thus prevent the unity of workers organizing into unions and into a united working class that fights to bring about a society that addresses the human rights and needs of all. New York State alone has more union members than all 12 Southern states combined.

“Right-to-work,” anti-union codes and stripping of collective bargaining have now spread outside the South to states like Michigan and Wisconsin. Workers from Detroit and Wisconsin attended the school to show solidarity and connection with the workers’ movements there. A strong delegation of day laborers from New York, who belong to the Movimiento Independiente de Trabajadores (Independent Workers Movement), also attended.

Recently elected Local 8751 Treasurer Georgia Scott connected her experience as a young girl in Alabama, where she and others in the Civil Rights Movement were attacked in 1965 by police while marching across the Edmund Pettus Bridge in Selma, to her recent union efforts.

President Emeritus Donna Dewitt, of the South Carolina AFL-CIO, told the assembled workers: “The Southern Workers Assembly was responsible for drafting the resolution that was adopted at the national AFL-CIO convention in 2013 to organize the South.” Yet the national unions and the two labor federations, the AFL-CIO and Change to Win, have not engaged in coordinated efforts in many years to organize labor in the South.

With few exceptions, unions organizing in the South tend to be trying to make up for the loss of union members elsewhere. They lack a long-term strategy, including allocating financial resources to organize Southern labor as a social movement. Dewitt continued, “This school was a critical step to move this plan forward.” At the end of the school, workers discussed a constitution for the Southern Workers Assembly and vowed to take it back to their locals for adoption and support.

The school is taking place within the mainstream media showcase of the general elections.  At the workers school there was a fishbowl with presentations by Charles Brave, Vice President of International Longshoreman Association Local 1422,  Sandra Wakefield, leader of Texas National Nurses Union and Angaza Laughinghouse, Vice President of UE local 150, NC Public Service Workers Union.  After the presentation, workers assembled discussed and voted to support the resolution for “Building People’s Assemblies, Platform and Workers Power Before/During/After the Elections”. Unfortunately, most unions are rushing to endorse candidates and have left no real space and time for its members to discuss all the important issues at stake. This school was an opening of a process to  develop a workers platform representing our own interests and to build local workers and people’s assemblies. Many school participants vowed to take the resolution back to their workplace, local, regional and national unions for further discussion.  If you would like a copy of the resolution, emailinfo@southernworker.org.

The struggle to organize the South just took a momentous leap forward.