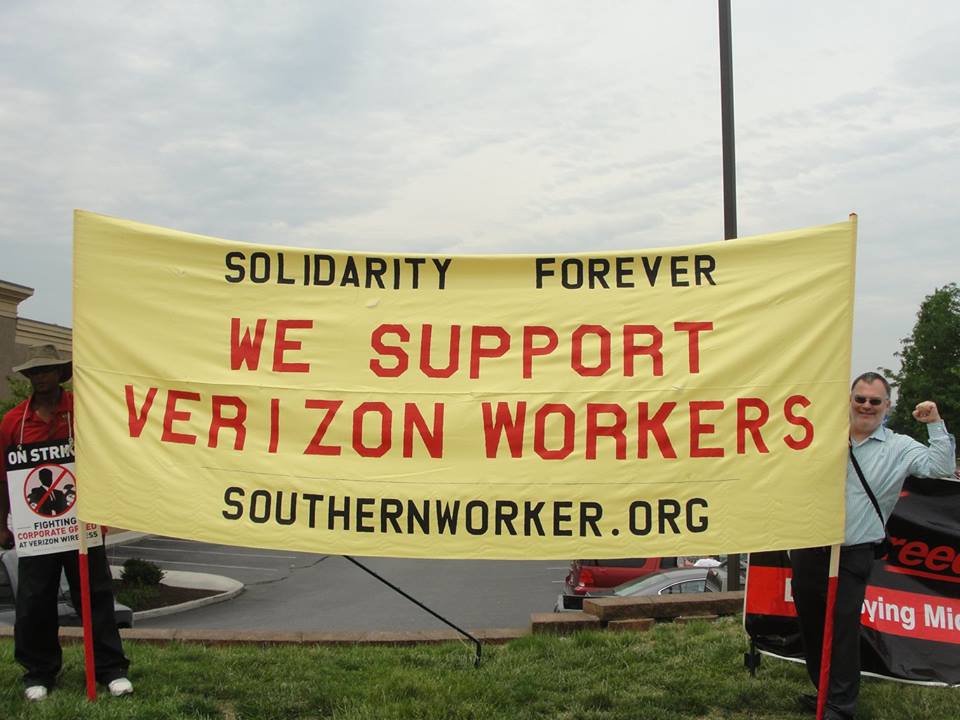 This week members of the Communication Workers of America (CWA) and International Brotherhood of Electrical Workers are heading into their second month on strike against the greedy Verizon corporation. These courageous 40,000 union members are on strike from Virginia to Massachusetts.

In an outrageous move, on May 1 (May Day), Verizon cut off health benefits for active members on strike [and we have to get the info about the retirees]. Verizon has also pressured judges to issue injunctions in Virginia. The members are doing their part for the entire working class by standing strong on the picket lines for all workers. They are fighting for respect, job security, living wages and benefits, and a dignified retirement.

It is urgent we increase our support to assist them right now.

How you can help:

The fight being waged by CWA-IBEW is our fight too. Solidarity Forever! 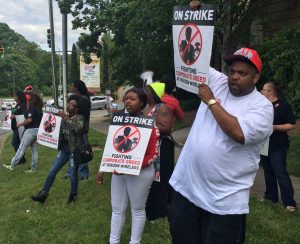 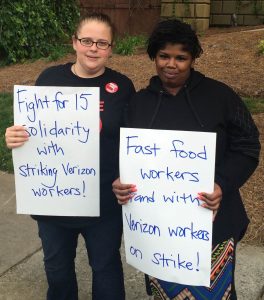 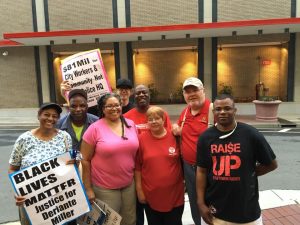 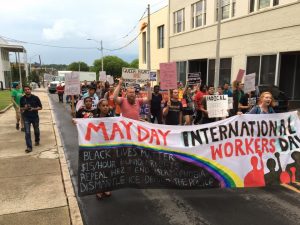 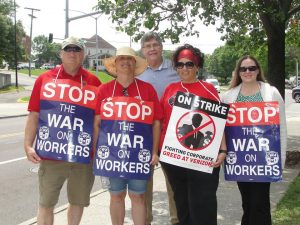 Tell the General Assembly to stop their divisive tactics, taking away local Citizens Power & our self-determination!

Workers Must Organize at their Workplaces to Expand Protections Against Discrimination!

Workers and our communities must have the international recognized human rights and freedom to Peoples Power! The power to address our human rights to public accommodations, living wages, terms of employment and cultural, social, and economic standards. The Human Right to exercise our power,  work without discrimination and to  speak in our own voice and organizing our own power in our unions and organizations was stripped away with House Bill2!

In late March, the NC General Assembly quickly called a special session and in about 8 hours (with out any public debate) quickly passed House Bill 2/ “HB2”. Tactically, they used this law to demean and scapegoat the Lesbian, Gay, Bi-sexual, Transgendered and Queer (LGBTQ) community. They used this attack to create division among the working class as they took away “Peoples Power” in local cities, towns and counties. They took away working peoples power to address workers’ rights, wages, sick time, benefits and our local communities rights to self-determination to fight discrimination and address our local demands.

Under the North Carolina Constitution, the legislature does have the authority to determine what local governments can and cannot do. For decades, however, the General Assembly has provided our municipal and county governments freedom to regulate local public institutions and private businesses in a limited way. This includes local governments addressing discrimination and boosting the wages of their own city/county employees as well as public contractors. This also included the right to put local laws in place to support Minority/Women Businesses in their struggle to get local city/county government contracts that put us to work on public jobs.

The City of Charlotte recently used this authority to pass an important ordinance preventing public and private discrimination on the basis of sexual orientation and gender identity. The extremist right conservative NC  State Legislators is taking these rights away from our communities.

Their new law takes various powers away from local communities:

THIS LAW means North Carolina will join Mississippi as the only state without any state law protecting private sector employees from workplace discrimination on the basis of race, gender, age or disability. The bill eliminates any employee’s private right of action to sue an employer who fires him or her for a discriminatory reason in State Courts.

This law continues to take Peoples Power from us. They attacked our VOTING RIGHTS, MEDICAID,UNEMPLOYMENT INSURANCE BENEFITS MEDICAL, OUR UNIONS’ PAYROLL DEDUCTION, HEALTH INSURANCE,LOCAL RIGHT TO PROVIDE LOCAL SAFE CLEAN WATER, AND NOW  WORKERS RIGHTS!!!l  North Carolina’s workers and UNIONS MUST READ, EDUCATE AND MOBILIZE WORKERS IN OUR UNIONS, COMMUNITIES AND CHURCHS/ HOUSES OF WORKSHIP AND SCHOOLS ABOUT THIS RECENT “HB2” AS  DIVISIVE AND TAKING AWAY “PEOPLES POWER” ! It gives even greater power to businesses to ATTACK AND discriminate against workers and weakens the ability of local CITIZENS /governments to raise wages and fair labor standards AND PROTECT THE HUMAN RIGTS OF ALL CITIZENS IN OUR LOCAL COMMUNITIES!—Your voice and all  workers in our community must be heard now.

Take Action! Tell the General Assembly to stop THEIR DIVISIVE ATTACKS ON OUR FELLOW RESIDENTS  and taking away our  power from workers and all  local communities’

Take Action!  Get a copy of your workplace policy, handbook or union contract clause regarding workplace discrimination. We are encouraging workers to fight their employers to expand this language to include ALL forms of discrimination including sexual orientation, gender identity and gender expression. Download this flier and discuss with your co-workers today!