Fight for $15 stages national strike, civil disobedience across US and South

By Ben Carroll, Raise Up 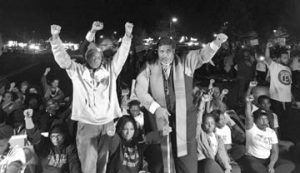 On November 29, fast food and low wage workers in over 300 cities across the US and the South went on strike demanding at least $15/hour and the right to form a union at McDonalds and other fast food restaurants. They were joined in these cities by home healthcare, childcare, airport, and other low wage workers and community members who have joined the Fight for 15 and, in many cases, have begun their own organizing initiatives to demand justice, higher wages, and unions in their workplaces. 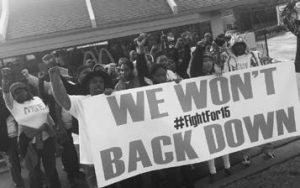 The actions on November 29 were part of a “National Day of Disruption” initiated by workers in the Fight for 15, and also marked the four year anniversary since the movement began with several hundred fast food workers in NYC who walked off the job calling for $15 and union rights. From the call to action:

“We are the 64 million hardworking Americans that make far too little to live. We reject the politics of divisiveness that tear America apart by race, religion, ethnicity, and gender. We say unequivocally – any efforts to block wage increases, gut workers’ rights, deport immigrants, or support racism or racist policies will be met with unrelenting opposition. We demand $15 an hour and union rights. We say NO to deportations. We demand an END to police killing of black people. We won’t back down.” 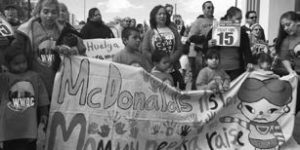 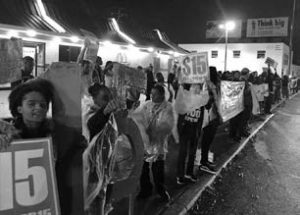 Hundreds of workers and community members across the South also engaged in civil disobedience during the strike to declare that, in spite of the obstacles and challenges that our movements face particularly in light of the outcome of the national election, we will continue to fight and won’t back down. Workers in North Carolina were joined in civil disobedience both by Rev. Dr William J Barber II, president of the NC NAACP, and Rev Curtis Gatewood, Historic Thousands on Jones Street coordinator, along with other community supporters.