Mississippi union organizers at Nissan vow to fight on

Mississippi union organizers at Nissan vow to fight on 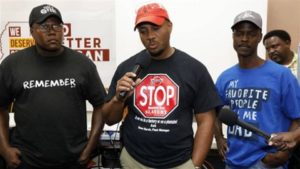 A UAW supporter outside an employee vehicle entrance at the Nissan vehicle assembly plant in Canton, Miss., Aug. 4.

In July, union organizers at the Canton, Miss., Nissan vehicle assembly plant took a historic step toward becoming the first unionized plant of a foreign auto company in the U.S. The United Auto Workers filed a petition asking the National Labor Relations Board to hold an election to determine if workers wanted the UAW to represent them. The election, the first in the 11-year organizing drive, took place on Aug. 3-4.

Late on the night of Aug. 4, organizers learned they had lost the election by a wide margin. Ernest Whitfield, a member of the union’s Volunteer Organizing Committee, was a poll watcher and witness to the vote counting. It was “heartbreaking,” he told Workers World, to see all the ballots marked “no” being counted. With over 3,500 out of 3,700 Nissan workers voting, the final result was 62 percent against union representation.

The vote does not mean, as Nissan would have the public believe, that workers love the company. There is anger on the floor over unsafe conditions, the growing use of lower-paid temporary workers and widespread racism directed at a workforce that is majority African American. “Labor rights are civil rights” was the theme of a solidarity march that drew 5,000 supporters earlier this year and gave a shot in the arm to the organizing drive.

Understanding the pressure that workers were under, organizers are not throwing in the towel.

Scare tactics were ratcheted up the moment the election petition was filed. Workers were bombarded with anti-union propaganda at every turn — from a PowerPoint presentation shown round-the-clock on televisions in the break areas to anti-UAW commercials on television, radio and the internet. Mandatory daily shift-start meetings featured company videos attacking the union.

The main threat was possible closure of the plant if the UAW came in. Workers were also threatened with losing their vehicles, leased under an employee program that Nissan said it would terminate if the union won, and with cuts in pay and benefits.

Letters were mailed to the homes of “Pathway” workers — Nissan workers who began work in the plant as employees of temporary agencies such as Kelly, Minact Yates, Onin and Excelsia. The letters said those workers could lose their jobs if the union won. Company messages blamed the UAW for General Motors plants closing down and warned workers that having a union would force them to take their problems to a union steward — as if they had a better chance of resolving a grievance by talking to their boss one-on-one!

Nissan managment also exploited an unfortunate corruption scandal in the UAW involving a deceased senior official and his widow taking hundreds of thousands of dollars from Fiat Chrysler. News of federal indictments for the illegal bribery scheme was leaked right after UAW supporters working at Nissan filed with the NLRB.

Anti-union intimidation culminated the Tuesday before the election. Nissan rented a big tent, seating 1,000 people, in which every worker on every shift was forced to attend a captive audience meeting. They were addressed by the plant manager and other management higher-ups. All the same threats were reiterated and combined with a feel-good message from former bosses. School buses were used to transport workers from remote areas of the plant to the tent. The company gave out free bottled water with custom “Nissan” labels.

Whitfield, the volunteer union organizer, estimates Nissan spent between $5 million and $10 million on its campaign of fear.

Nissan has flouted labor laws repeatedly, leading the NLRB to file an unfair labor practice charge against the company. The UAW filed another seven charges over the illegal intimidation that took place in the weeks leading up to the election. The NLRB could declare the election results invalid and order another election.

“This is the length to which the company went to essentially scare the hell out of everybody to get a no vote,” Whitfield explained. “We’ll take a moral victory,” he added, from the fact that almost 40 percent still backed the union.

The ongoing organizing campaign at Nissan has ramifications beyond the 6,000 workers inside the Canton plant. There are over two dozen auto “transplants” — U.S. plants of foreign auto companies — in this country, with all but a handful in the southern states. They have deliberately chosen to locate in so-called “right-to-work” states where union strength is lowest; only 6.6 percent of Mississippi workers belong to a union.

The UAW has been unable to organize a single transplant. In 2014 the union lost a representation election at Volkswagen’s Chattanooga, Tenn., plant.

There, too, fear and intimidation affected the vote outcome. In that case the right-wing, racist political establishment led the anti-union drive. Sen. Bob Corker raised the specter of a plant closing just days before the election.

Since then the UAW has won an election to represent 160 Volkswagen skilled trades workers, but VW refuses to recognize them as a bargaining unit, while the vast majority of plant workers remain unrepresented.

The UAW’s organizing efforts have also been hampered by its own failings. For too long the International leadership has sold concessions — from multi-tier pay schemes to oppressive work schedules to cutting retiree health care — to the membership so that the Big Three auto companies can be “competitive” with the transplants.

The UAW argument has been that concessions are unavoidable as long as the unorganized transplants have lower labor costs. But the flip side is that workers would be more enthusiastic about joining a fighting union that refuses to give up the gains it won through decades of class struggle. This was a factor in the loss at VW.

The courageous struggle for worker and civil rights at Nissan is forging ahead. “Going forward, the idea is for that 40 percent who voted yes to educate others,” said Whitfield. “Knowledge is the key to drive out fear; people voted no out of fear because of what they don’t know. We are going to stick together. We believe we can actually win over the percentage we need to win an election. We are going to try this thing again.”

By building the organizing campaign as a civil rights movement, the Mississippi Alliance for Fairness at Nissan has taken the first steps toward the social unionism that drove the Congress of Industrial Organizations to victory after victory in the 1930s. Labor must be part of an entire social movement and orient itself toward rank-and-file self-organization and power.

The organizing committee can become — and is already to some extent — a pre-majority organization in the plant that fights for all the workers even without having formal collective bargaining power. Other unions, especially the United Electrical Workers, have rich experience with this model. Rank-and-file workers need to establish industrywide networks to share information and strategize collectively. The Southern Workers Assembly is developing cadres of workers all across the region that have organic relationships to community organizations.

A win at Nissan would not only be a gain for U.S. autoworkers but also bring a huge boost to the urgently needed effort to organize the South.