The Southern Workers Assembly sends our solidarity to the education workers and their unions across West Virginia that are in a tremendous class struggle against austerity. For more than a week, rank-n-file educators have been defying state law and leading rolling walk-out strikes to fight for a decent family-supporting wage, for access to affordable healthcare and in defense of their union rights.

The crisis of funding for public education and all public services has been brewing in West Virginia, and in fact across the South and entire country for a few years. However, it was the brave rank-n-file members in the southern counties of West Virginia that took the initial efforts to organize walk-outs from their schools, shutting many down across several counties, which spread in the following days across the entire state in to rolling walk-outs in all 55 counties, and thousands of workers rallying at the state Capitol in Charleston for several days. They also did the critical work to build support amongst the students, parents and their communities, so when they walked out they were supported. The community and the unions helped organize food distribution, childcare and other survival mechanisms to support the education workers in their actions.

Thousands have been rallying at the state capitol in Charleston for over a week in some of the largest worker demonstrations in the state since the days of the major struggles of the mine workers. In fact, on Feb. 26 raising the fighting legacy of Dr. Martin Luther King, Jr., a strong union supporter, United Mine Workers of America President Cecil E. Roberts gave a fiery speech at the rally, saying that “workers who stand united will never be defeated.” 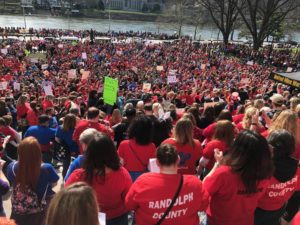 Many teachers were angered by the Republican-controlled state legislature and Governor Jim Justice who were refusing to offer any wage increases. Educators and state employees have had wages frozen for a few years without any increases. Teachers earn less than 47 out of 50 states across the country. The state was also threatening to make drastic cuts to the state insurance agency, Public Employee Insurance Agency, which would drive up costs for state employees, teachers and their families. They were also facing three other major anti-worker attacks including passing of a Koch brothers-sponsored payroll deception bill to eliminate payroll deduction for union dues, privatization of public schools through allowing the creation of charter schools, and stripping seniority rights for reductions in force.

After four days of statewide walk-outs and thousands rallying at the state Capitol on Thursday, February 22 and Friday, February 23, and again on Monday, February 26 and Tuesday, February 27, the unions were able to force Governor Justice into a deal. Gov. Justice promised a 5% raise for educators and 3% raise for state employees, agreed to find funding to support PEIA, and also to eliminate the 3 anti-worker proposals.

Governor Justice didn’t become a billionaire and richest man in West Virginia without having some nasty tricks. He immediately called a press conference to announce the deal, before union leaders were able to bring back the proposals to their union members. This had a big impact on the rank-n-file workers which felt betrayed because they had not ratified any deal. Many leaders of union chapters across the state are upset, and in defiance of the statewide leadership, called for continuance of walk-outs to oppose the deal. Workers have effectively shut down schools again on Wednesday, February 28 and Thursday, March 1.

We have confidence that the national leadership of both the AFT and NEA will very soon issue to their members a detailed breakdown of the tentative settlement and will convene meetings throughout the state at which teachers may discuss the settlement offer and vote their decision. Until the teacher-members reach their decision, we urge teachers, students, parents and allies to continue to support this very impressive walk-out.

Teachers, nurses, state employees, fast food workers and industrial workers – in fact all of us – continue to grapple with the unresolved crisis of our health care system. School districts and teachers and other school employees cannot solve this problem alone. The only sensible answer is found in a national health care system that covers all of us – Medicare for All.

The primary fight here is not against our union leaders, it is supporting the rank-n-file activity standing up against pro-big business politicians. It’s really the legislators that are striking the deals and selling out the workers. These politicians have interest of energy companies and general private capital. We are encouraged by the workers fighting within their unions, to make them more progressive and class conscious.

The Southern Workers Assembly affirms our support for the rank-n-file members in this historic battle, and urges you to continue to build your unions. West Virginia, like many southern states, bans public workers from having collective bargaining agreements. This forces unions into a different relationship with the decision-makers. In the days as we await the Supreme Court decision on the Janus case, which would effectively make public sector workers in all states right-to-work, we are reminded that even workers in the RTW states, concentrated in the US South, can build their unions, fightback and win. The type of mass rank-n-file action displayed by WV educators is an example for us all to follow.