680 Majority Latinx Workers in Mississippi Taken off their Jobs by ICE: An Injury to One is an Injury to All! 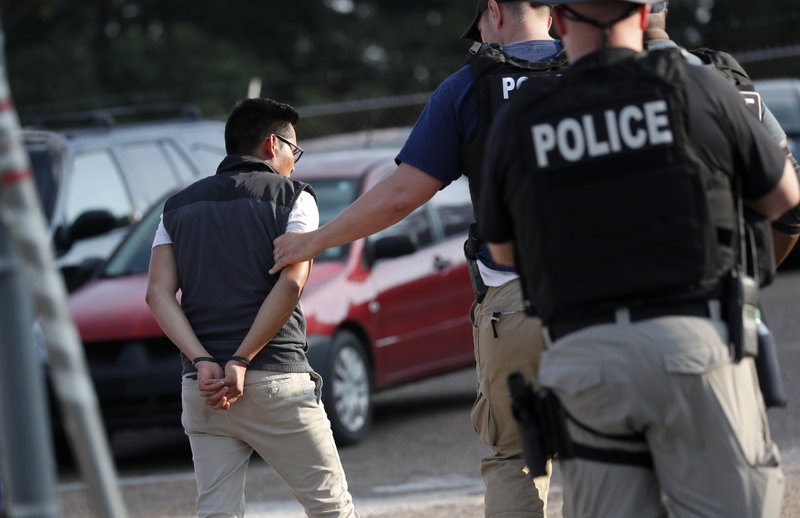 On August 7, the US Immigration Customs Enforcement (ICE) conducted raids on workers in 7 food processing plants in six Mississippi cities.

These workers came to the US to try to earn an honest living, because conditions in their home countries prevented them from living in peace, supporting their families and endangering them by military and social violence and climate changes.  US foreign policies in Latin America, the Caribbean and Africa contribute to the conditions faced by the majority of these immigrant workers.

The families, communities and cities that depend on the incomes of these workers are being disrupted representing a form of ethnic cleansing consistent with the demands of white nationalism.

Although the ICE representatives claimed that this mass raid was not ordered by the Trump administration, it fits the racist and xenophobic lies that immigrants are taking U.S. jobs. These mass raids are part of Trump’s white nationalist claim of bringing back U.S. jobs.
This raid is not only a violation of human rights that needs stronger language in the Universal Declaration of Human Rights, it is also an attack on the working-class, aimed a fostering greater divisions and fears. It is part of the corporate strategy to create a climate of insecurity within the working-class to super-exploit immigrant and all Southern workers.

The US South has attracted large numbers of Latinx workers.  Along with African descendants and Indigenous people the combined amount of people of color in the South is about 40 percent of the population of 108 million. What capitalism does to its most oppressed and exploited sectors sets a direction for capitalism’s plans for the entire working-class.

Organized labor and working-class communities in the South, nationally and internationally must show solidarity with these workers.  They must know that they are not isolated and are part of the workers struggle.

The Southern Workers Assembly calls on all member organizations, all workers in the labor movement and communities dependent on the working-class to take some solidarity action to express solidarity with these workers and our outrage at the actions of the federal government.

Please send feedback on what action you organizations can take based on your capacity. If taken in your organizations name, add member of Southern Workers Assembly to show the mobilization of our network.