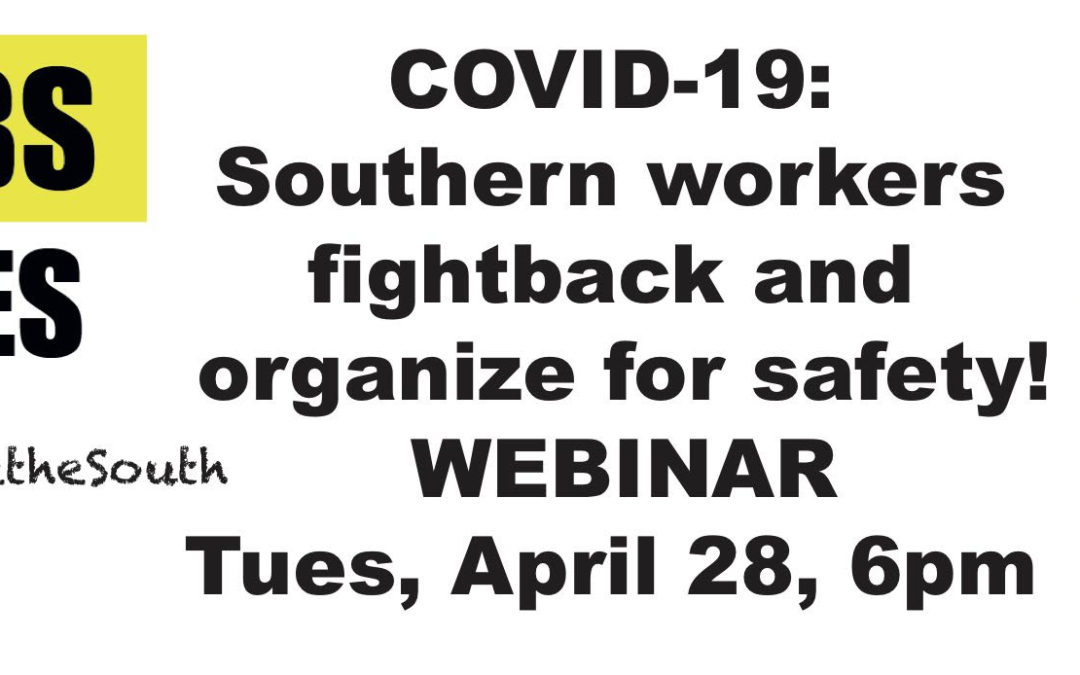 Webinar will be co-facilitated by:

Danielle Brown is the Black Voters Matter NC State Coordinator; A. Philip Randolph Institute Organizer; and Founder of IMPAXT, Inc. She has worked with various labor unions, community and grassroots organizations on various campaigns to ensure that the mission and needs of the people are met.

Carl Rosen, United Electrical, Radio and Machine Workers of America (UE), National President, will be speaking about the call to the Labor Movement To Organize Worker Fightback in the Face of the COVID-19 Crisis

Ajamu Dillahunt, American Postal Workers Union, Retired Local president, and Director of Education for NC APWU Council, currently working with rank and filers and local activist and leaders to engage members in the fight for workplace safety and saving the postal service from privatizers.

Workers across the US South are on the move demanding workplace safety amidst the global COVID-19 pandemic. Southern workers also need a strategy and self-organization to secure any gains they make through collective action. As we reach nearly 17 million people becoming recently unemployed, our for-profit health care system tied to a job is increasingly being exposed. Health care should be a human right for all.

Studies show that the Black working class, because of the capitalist system’s historical oppression and neglect, has suffered the highest number of deaths from COVID-19. 57 percent of the US Black population live in the South, a region where racial, economic, social and political inequality has been the highest for Black America.

How do we use this moment to advance the organization of workers at the workplace and to build solidarity formations such as local workers assemblies, especially in the Southern region with lowest union density? How can this crisis help us get closer to a universal, single-payer health care system?

We seek to launch a South-wide campaign that unites workers on the following PRINCIPLES:

2) Building workplace organization and uniting with your co-workers in collective action is best way to combat unsafe conditions, and

3) Healthcare is a human right – health care should not be tied to the employer, it should be provided to everyone, even those recent unemployed through a universal single-payer system like “Medicare for All”, and all testing and treatment related to COVID-19 should be covered by single-payer public health insurance like Medicare. While also recognizing that we need to immediately fight our employers to provide affordable health insurance coverage until the day this is won.

Some of these questions (and more) will be discussed on this webinar, organized by the Southern Workers Assembly on Tuesday, April 28 at 6:00pm.  Join us!