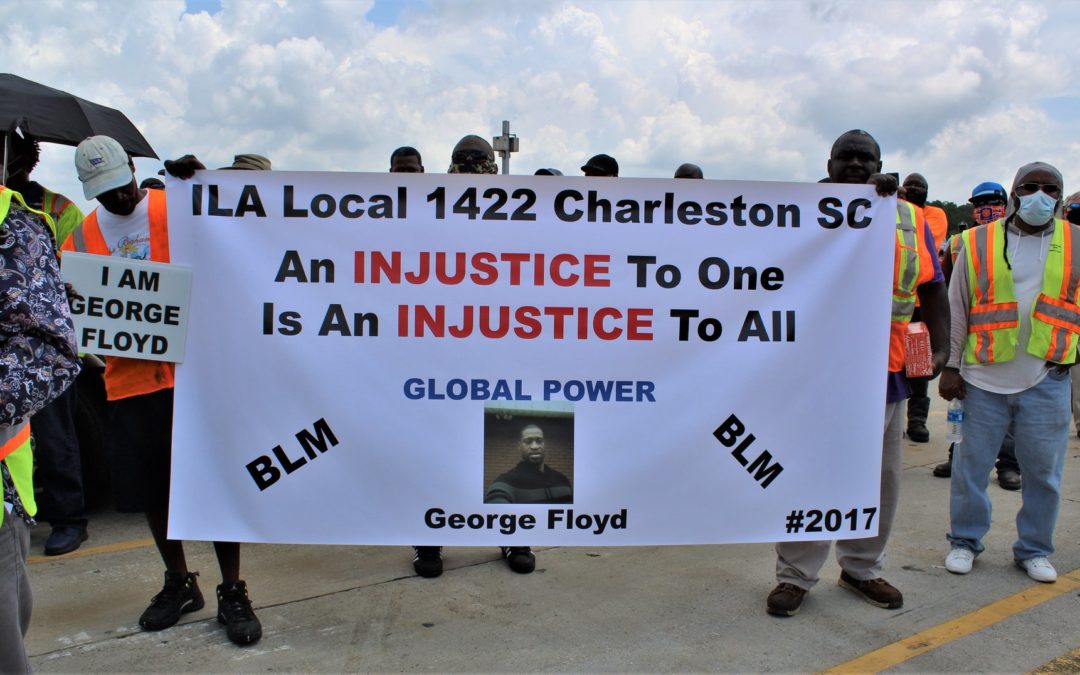 South Carolina workers are on the frontlines of the fightback against the pandemics of pox, poverty and police violence. On June 9, Charleston longshore workers stopped work to join thousands of waterfront workers across the country and the world in protesting police violence and to remember George Floyd. “It is imperative that this industry—the maritime industry that is responsible for moving 95% of the world’s trade speak with one voice,” International Longshoremen’s Association leader Ken Riley told the assembled protesters, that included members of ILA Locals 1422, 1422A, and 1771. “Let the entire world know that we will not sit silently on the sidelines and witness the senseless murders of blacks and people of color at the hands of law enforcement officers in America or anywhere else in the world.”

Where police violence is concerned, ILA members know of what they speak. Soon after its founding, the Charleston ILA was nearly aborted by police terror. At the corner of Hasell and Concord streets on September 19, 1936, Charleston police used all of the City’s available military hardware, including its submachine gun and pump rifle, to attack three hundred union members as they attempted to secure wages they were owed by the A.E. Holleman Stevedoring Company. Many were beaten and four leaders were jailed. That scenario was repeated in January 2000 when six hundred state troopers and highway patrol officers descended on a lawful ILA picket line, beating and jailing dozens of union members. Five ILA members faced long prison sentences on felony charges of inciting a riot. Their release from house arrest nearly two years later came only after an international solidarity campaign to “Free the Charleston Five.” Every African American ILA worker in Charleston has been victimized by racist policing through profiling, harassment, unwarranted arrest, assault, or even gun violence. Most notorious in recent years was the murder of Walter Scott on April 4, 2015. Scott, whose brother is a member of Local 1422, was shot in the back by a North Charleston police officer.

Meanwhile, in Holly Hill, South Carolina, the 11-year-old son of Fight for $15 activist, Tina Watson was assaulted by an Orangeburg County sheriff’s deputy during the eviction of a neighbor. Her son is presently struggling with severe psychological trauma following the incident. Watson, a fast food worker and organizer Theresa Milligan are demanding an investigation leading to the dismissal of the offending officer. They are asking that supporters call Sheriff Leroy Ravenell to demand justice at (803) 533-5805.

White collar workers in South Carolina are raising their own concerns. Editor Kristen Kornbluth was recently fired from the Charleston Post and Courier after she approved the social media posting of an article that was critical of the newspapers’ handling of the Coronavirus. Newspaper staff have been pushing back against management pressure to return to the office after two months of working remotely. Kornbluth’s case was recently featured in the New York Times. Kornbluth spoke to members of the Charleston Alliance for Fair Employment about fightback strategies and continuing efforts to protect newsroom staff.

Kerry Taylor is the coordinator of CAFÉ (The Charleston Alliance for Fair Employment)—a group of labor, faith, and community activists, working for union rights and economic justice. Contact: Kerryt33@gmail.com

ILA members, non-members, members of the South Carolina Stevedore’s Association, members of the South Carolina Ports Authority, our legislators, and friends of this great industry. We gather here at this time, 12pm noon, 11am central time, the exact time that George Floyd’s funeral is scheduled to begin. This brutal murder has ignited a global movement in all countries around the world, the likes of which we have never seen before and may never see again in our lifetime.

It is imperative, it is important that this industry, the maritime industry that is responsible for moving 95% of the world’s trade speak with one voice this day and let the entire world know that we will not sit silently on the sidelines and witness the senseless murders of blacks and people of color at the hands of law enforcement officers in America or anywhere else in the world. This world is united around this message and so are dockworkers around the globe.

Speaking on behalf of the ILA and the Port of Charleston and the International Longshoreman’s Association on the East Coast and the Gulf coast of the US. And on behalf of all the dockworkers on every continent in the world, the International Dockworker Council, we want our voices to echo what any person of conscious—any man, any woman, any boy, any girl, anywhere in this world on this day—when we are chanting Black Lives Matter. Can you say Black Lives Matter?

When it comes to economic justice, BLACK LIVES MATTER!

When it comes to gentrification, BLACK LIVES MATTER!

When it comes to housing opportunities, BLACK LIVES MATTER!

When it comes to business opportunities, BLACK LIVES MATTER!

When it comes to education and equality, BLACK LIVES MATTER!

When it comes to fair lending practices, BLACK LIVES MATTER!

When it comes to student loans, BLACK LIVES MATTER!

When it comes to equal pay, BLACK LIVES MATTER!

When it comes to job promotions and recruitment, BLACK LIVES MATTER!

When it comes to better policing, BLACK LIVES MATTER!

When it comes to healthcare, BLACK LIVES MATTER!

And when it comes to liberty and justice for all, BLACK LIVES MATTER!