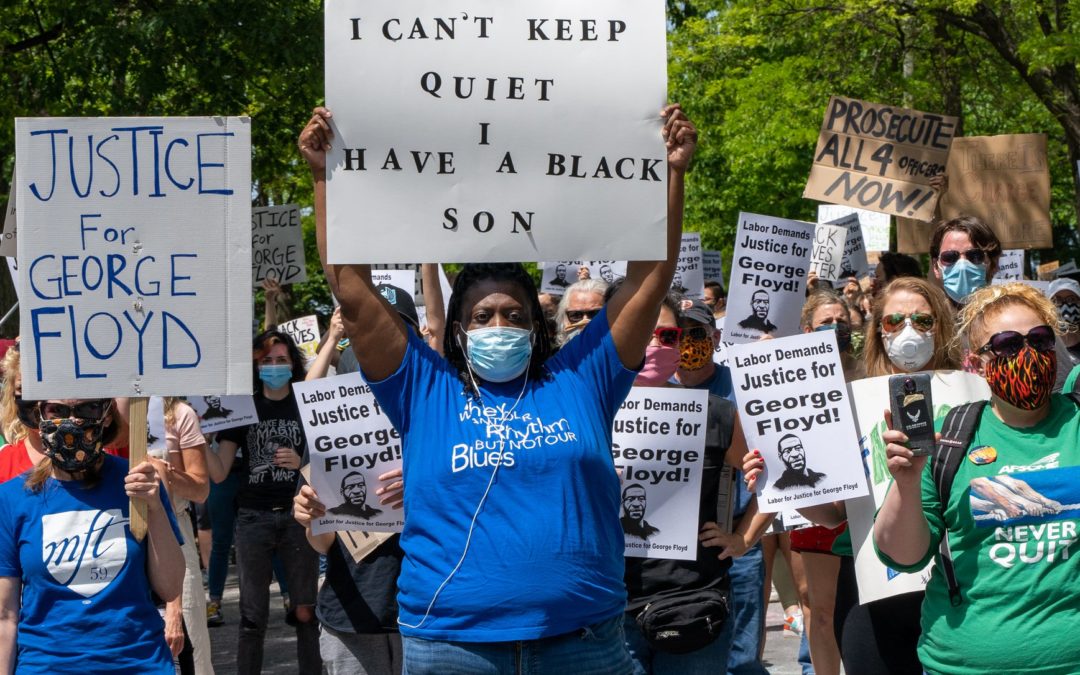 Workers in the US are currently facing two tragic pandemics. The first is the plight of essential workers, going to work every day to risk their lives amidst COVID-19, which has now resulted in the tragic death of over 100,000 people. The second is the reality of racism and police violence. Both disproportionately impact Black workers.

Compounding the devastation of coronavirus, Black people in the US continue to face threats, brutality, and death for going to and from work. For being out jogging. For being poor. For sleeping in their own bed. For watching birds in a park. For being Black.

The murders of Ahmaud Arbery, George Floyd, Breonna Taylor, and Tony McDade highlight this grim reality. Now millions of people all across the country are protesting. After experiencing two months of grief from COVID-19, there is now a righteous feeling of collective anger.

According to the statement from UE national officers, “It is not surprising that protests over Floyd’s and Taylor’s killings have erupted into rage. It has been almost six years since the murder of Michael Brown in Ferguson, Missouri, focused our nation’s attention on police violence against people of color and poor people, and especially against Black men. Black Lives Matter, the Movement for Black Lives and many others have offered concrete policy proposals to address this injustice, yet little has been done and the killings continue.”

Tens of millions of workers find themselves in a condition of involuntary servitude, with no effective voice in their conditions of work, their health or the security of their livelihood. This is an intolerable situation for a nation that espouses democracy and constitutional rights. It can only be remedied by workers themselves, through collective action – protests, pickets and strikes – leading to collective bargaining.

Meanwhile, essential workers across the country have taken steps to participate and  support the protests.

These are some of the many ways that the labor movement can use our institutional power to build real lasting change.

It is no surprise that President Trump has threatened to deploy federal troops. We’ve taken the measure of this President over the past three years. He and his hanger-ons are a danger to the nation, and call out the worst elements in our society.  Federal authorities in DC and too many local police departments have repeatedly used rubber bullets, stun grenades and tear gas to clear peaceful protesters.

According to a statement from United Steelworkers union, “The history of our union movement is filled with similar incidents of guardsmen and police forces being used against workers [to break strikes]. It’s not a far stretch to envision expanded use of the military against today’s labor movement if we stand by while it happens against these protestors.”

We need to continue to build a labor movement that understands how to bring our labor power to bear to help pressure society to build a society where everyone has equal access to healthcare. We need a society where racism of police doesn’t lead to murders of thousands of Black and Brown people annually. This will require bold and decisive action. Our experience with building our unions puts us in a strategic position to take this action on the job and in the streets.

The Southern Workers Assembly has launched a Safe Jobs Save Lives campaign to support workers organizing their jobs for safety amid COVID-19. Sanitation workers in New Orleans and Tuskegee, AL have struck for safety. Bus drivers in Birmingham have stopped work. Poultry workers in Georgia and Virginia have walked out demanding PPE and hazard pay. Let’s unite these powerful actions with the uprisings in the streets demanding an end to police murders.

Meatpacking, COVID-19, & the Safe Jobs Save Lives Campaign – with discussion on labor’s role in fight against racism