Solidarity with Bessemer, Alabama Amazon Workers! A Major Campaign to Organize Labor in the South! 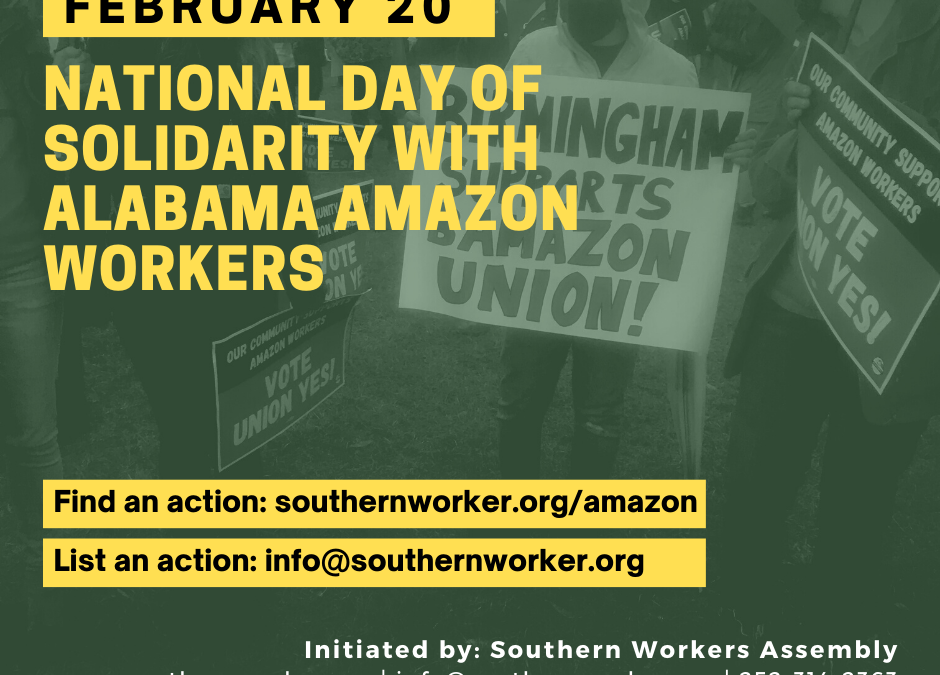 Workers at an Amazon warehouse in Bessemer, Alabama, are waging a historic struggle to win the first union at an Amazon facility in the U.S. The Southern Workers Assembly (SWA), an Organize the South Network formed in 2012, has called for a National Day of Action on Fed 20th, to help mobilize national solidarity with this important worker’s struggle. National solidarity with organizing in the South needs to be a permanent part labor’s Southern strategy.

Black workers make up more than 70% of the approximately 6,000 Amazon warehouse workers in Bessemer. This campaign offers the opportunity of forging rank-n-file worker unity against the systemic racism that is part of the history of Black oppression in the South and that has been used to divide workers and their communities.

In November 2020, eight months after officially opening the Bessemer Amazon warehouse in March, the workers led by the Retail, Wholesale, and Department Store Workers Union (RWDSU), petitioned to the labor board to hold a union vote. This was a shock not only to Amazon, but for corporate America that has historically viewed the South as a kind of domestic colony with systemic racism, weak labor and environmental laws, voter suppression, and a divided working-class. This is why major US and international companies have relocated industries to the South.

These workers have launched a history-changing organizing campaign against one of the biggest and most powerful transnational corporations in the world; and its super rich union busting owner, Jeff Bezos. These workers are standing up to the racist and anti-labor laws that suppress worker rights across the South where union density is low, and a region with the largest concentration of anti-labor right-to-work laws weakening and denying workers collective bargaining rights.

High paid union busters and some governmental officials, have united to lie and try and intimidate Bessemer Amazon workers to defeat the union vote. This should point out to Bessemer workers and workers across Alabama, that this campaign has the potential of making economic, political and social changes favorable for the working-class. This organized power is needed in the struggle for worker protections against the COVID-19 pandemic and for a system of Medicare for All.

Local unions, worker organizations and labor activists, need to form Worker Assemblies that help to build rank-n-file organizing and solidarity infrastructures for a social movement to organize labor in the South. The SWA Workers Schools can provide training in building these infrastructures.

Onwards to a union victory in Bessemer, and to Organize the South!