Bessemer Amazon Union Vote: We Learn as We Struggle!

In spite of the vote count, important developments have resulted from the Bessemer Amazon workers’ campaign. We applaud the Alabama Amazon workers who took on the world’s second largest corporation drawing thousands of activists into a long-over-due workers’ rights movement. Elected officials, clergy and leaders from major unions have expressed their support. Organizing labor in the South has once again become a national and international mantra.

Solidarity committees were formed in cities across the US, and workers in the South have registered for a Southern Workers Assembly School to learn how to begin organizing in Amazon and other major industries and sectors. Inspired by the courage of the Bessemer workers, these solidarity committees seek to unite workers, community and progressive forces into local worker assemblies.

The Bessemer Amazon campaign points out the difficulties in trying to organize in a single workplace location of a major corporation.  Amazon directed billions of dollars at defeating the Bessemer campaign by intimidating and making the Amazon workers and communities around Bessemer feel small and overwhelmed.  From the early tactic of paying workers $2,000 to quit while promising to not challenge their unemployment claims, to the many thousands paid to union busters and more, the company was determined to maintain some of the most inhumane working conditions existing today. In the face of that, the struggle by the Bessemer workers against this corporate giant was a real act of courage – for themselves,  for all Amazon workers, and for the Southern working-class.

Many Worker Committees in Many Locations Acting in Coordination

The US Southern, national and international labor movement and working-class has an obligation to advance the working-class struggle begun by this campaign  This will require a dedication to workplace-based organization and a commitment to take coordinated collective action to redress the worst of Amazon’s inhumane working condition.  There needs to be a national discussion about the Bessemer Amazon union campaign providing the workers a platform to talk about their experiences.  This discussion will be part of the work of the SWA Southern Workers School in the future.

The right to form a union and act collectively is protected by law. Any contrary actions by Amazon against workers must be challenged by all that supported this campaign. The issues don’t disappear because a union vote is completed. There is still much work to do to follow the momentum.

The Battle has Begun, Let’s Continue! 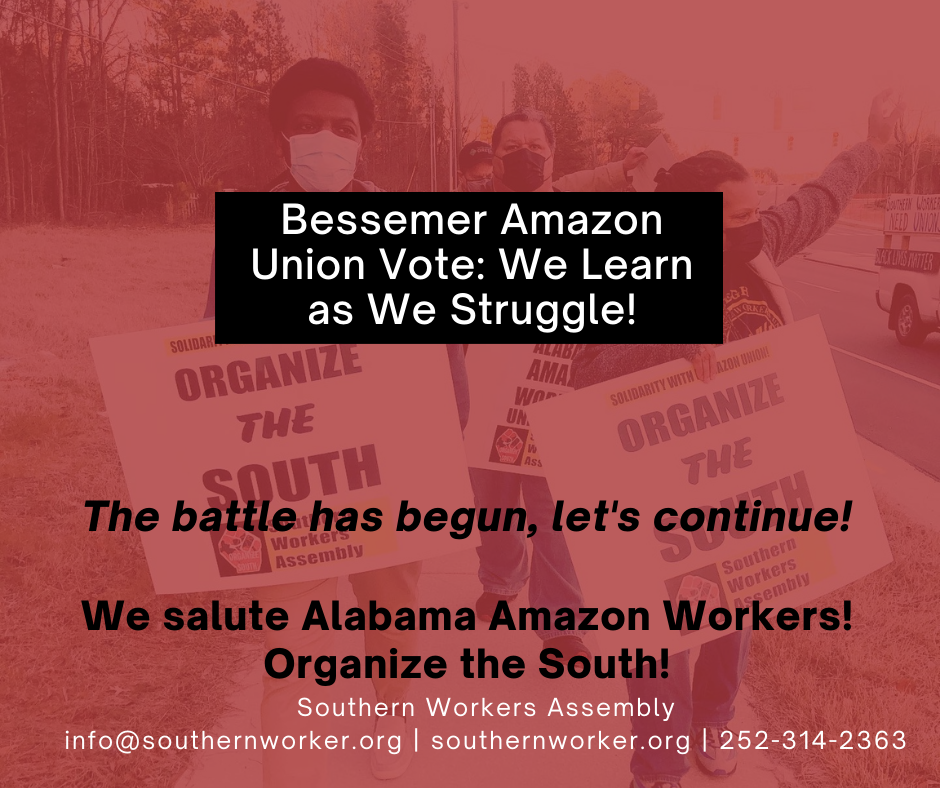