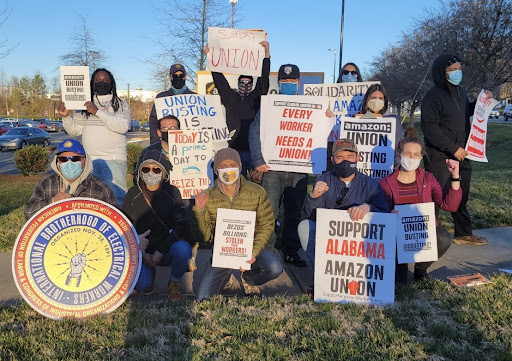 In late 2020, in the midst of the COVID-19 pandemic, workers at an Amazon warehouse in Bessemer, Alabama contacted the Retail, Wholesale, and Department Store Union (RWDSU) to begin a historic organizing campaign at the facility. In January 2021, the majority Black workforce of nearly 6,000 workers petitioned the National Labor Relations Board (NLRB) to hold an election for the union.

Amazon quickly began a campaign to intimidate workers and defeat the union drive, engaging in an unprecedented union busting campaign that the union has alleged violated dozens of statutes of U.S. labor law.

Recognizing the gravity and significance of this campaign as the first attempt to organize an Amazon warehouse in the U.S. being led by Black workers in the U.S. South, to demonstrate to the workers the wide layer of support across the region and the country, and to shed light on the egregious anti-union campaign that Amazon was engaged in, the Southern Workers Assembly (SWA) initiated a national day of solidarity with the organizing drive on February 20.

Upwards of 3,000 people participated in the actions on February 20. The Southern Workers Assembly additionally produced and provided materials to those holding actions, including placards and signs, leaflets to engage Amazon workers and other community members at the locations the demonstrations were held, and provided training ahead of time to help prepare the actions. The SWA produced a video documenting the activities held across the South, along with highlighting photos from the actions nationally and other assessments and analysis of the day of action as well as the campaign in Bessemer.

Given the tremendous response to the call for solidarity from labor and other social movement forces across the South and the country, it was clear that there was not only a growing recognition of the significance of the organizing campaign in Bessemer, but a renewed focus and interest to support worker organizing in the U.S. South. The South is a region where US corporations and state governments have enacted the largest concentration of anti-labor laws and social policies designed to prevent unionization, keep wages low and working people divided.  This has in turn helped to undermine the strength of the US national labor movement.

The Southern Workers Assembly made the call for the national day of action not as a one-time event. It was part of a larger strategy that requires the involvement of local and national labor unions, their rank-n-file, community organizations and social movements. It will take a national and international movement to organize transnational corporations in the South. The day of action greatly increased contact with unions, worker organizations, and other workers interested in engaging in work with the Southern Workers Assembly to build local workers assemblies and support the broader task of organizing labor in the U.S. South. Over 1,000 new contacts were made during the organizing for the February 20 solidarity day.

The SWA engaged in a series of focused followup, assessment, and discussion of next steps with organizers of the Southern actions following February 20 to strengthen relationships with these organizers for the longer term work to build local workers assemblies and foster greater contact among worker organizing efforts in the region.

From those discussions, a four part virtual worker school was initiated that took place from late April to June 2021. Each session included a political education presentation and discussion, covering topics such as Amazon’s role in the global economy, building a 21st century working class movement, the role of the state in capitalist society, and tactics for struggle. The sessions additionally included a section on practical skills development and an orientation on how to build local workers assemblies, from identifying workplaces of significance in your city, developing worker cadre, how to engage in workplace leafleting and outreach, and more.

More than 200 Southern workers registered to participate in the school, and each session had upwards of 100 regular participants who attended all four sessions of the school. During each session, those in close proximity to one another were broken out into small groups to engage in discussion to put into practice the skills that were being covered in each session. These local areas also received assignments to continue this work between calls.

Following the conclusion of the school, the SWA engaged the local and industry-based assemblies in discussion to collectively identify a campaign that could be taken up by the assemblies, strengthening the regional character of the work while also giving a high degree of flexibility to the work happening in various cities and sectors of the economy. This gave rise to the SWA’s ‘Democracy at Work & in the Community’ campaign, connecting the fight for voting rights (in light of right-wing efforts to slash the Voting Rights act and other voting rights protections) with workers to have power on the job (workplace democracy via passing the PRO Act in Congress. We sought to link with the Black Lives Matter movement, the fight for justice for migrants and immigrants, the attacks on women and LGBTQ workers, and other social issues impacting working class and oppressed communities in the South. The campaign additionally tied the fight for the PRO Act with the fight to pass voting rights legislation in Congress, both of which have tremendous ramifications for workers and oppressed people in the region. The SWA produced a series of the three leaflets over the course of the campaign that local assemblies used to conduct regular outreach at significant workplaces in their areas that they had collectively identified. Leafletting actions targeted Amazon warehouses, municipal workers, casino workers, hospital workers, A&W transmission auto-parts workers, Revlon workers and others in several cities.

Additionally, there are now Amazon workplace committees in several Amazon facilities across the South that the SWA is helping to develop.

This work has further developed the local and industry-based councils over the preceding several months. To consolidate, strengthen, and further develop our work, the SWA is currently preparing to launch an organizing fellowship program that draws from the ranks of the local assembly to provide additional training, support and structure to the work of the local assemblies. Each assembly and industry identified a candidate to participate in this process, who will commit an additional 10-15 hours each week to the many tasks to build the assemblies, participate in weekly team meetings consisting of political education and practical skills development, and meet regularly with a member of the SWA Coordinating Committee to produce and follow a work plan over the next six months.

A three part school will be held for these candidates beginning in mid-November and concluding in mid-December. Following the conclusion of the school, 9 candidates will be selected to participate in this fellowship, which begins in January 2022 and runs through June. Each of those selected will additionally receive a small stipend to support their work.