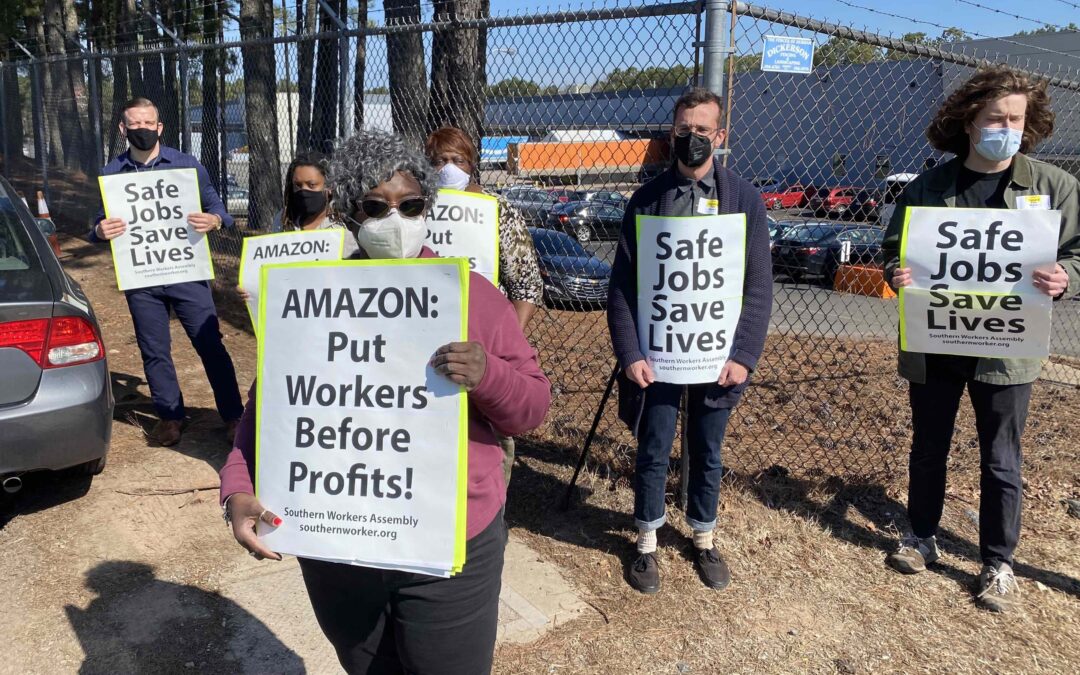 Gloria Lee, a former Amazon worker, spent her afternoon leading chants and talking to Amazon workers outside a delivery station in east Durham. “Jeff Bezos you can’t hide! We can see your greedy side,” she chanted along with other Amazon workers and supporters as part of a statewide day of action around COVID-19 workplace safety issues. Lee cited the recent death of an Amazon worker at the Fulfillment Center in Garner as one of the reasons she felt compelled to organize today’s action. 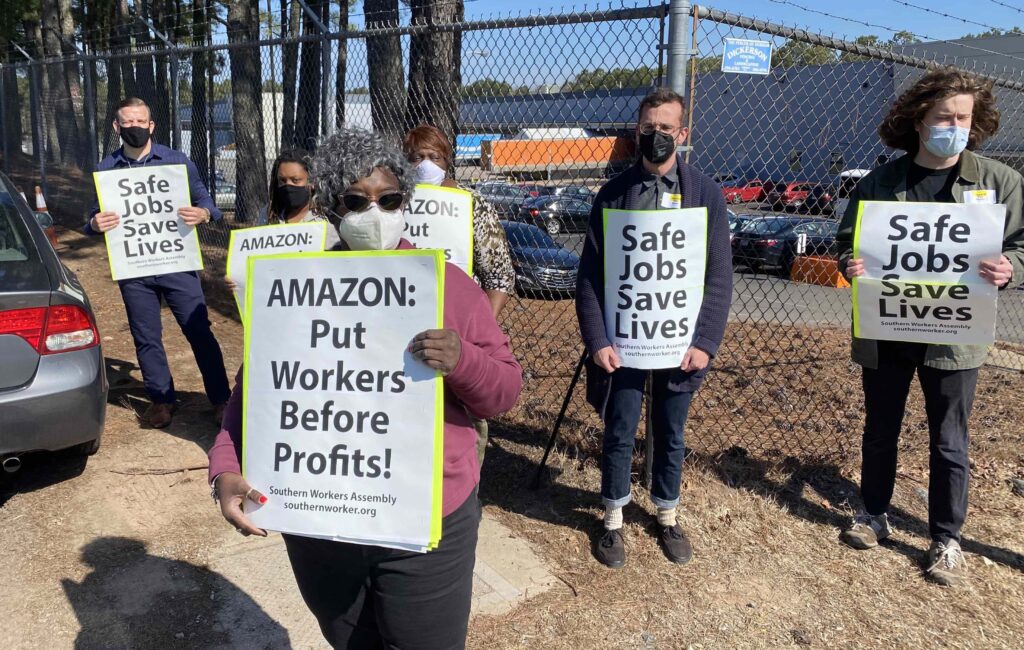 On February 16, thousands of workers in dozens of workplaces across North Carolina participated in workplace actions to demand more safety amid COVID. Delta and Omicron variants of the coronavirus are continuing to surge across North Carolina and increasingly pose a terrifying workplace safety concern. Most recently, an Amazon worker at the Garner RDU1 Fulfillment Center, as well as a Charlotte City light rail operator, died of COVID. This is a dire emergency. Employers and the NC Department of Labor are not moving to implement emergency standards to keep workers safe. Labor leaders have been meeting with NCDOL Commissioner Josh Dobson since his election. Yet, despite his public pronouncements, Dobson has done little to keep workers safe, including increased enforcement and implementation of Emergency Temporary Standards to address the unique challenges of coronavirus.

“Amazon doesn’t care about the protocols to keep us safe, they only care about their profits,” stated Kaiya Taylor, FC Associate, Amazon RDU5 Sort Center in Durham and member of the Carolina Amazonians United for Solidarity & Empowerment (CAUSE).

Taylor continued, “Like making sure everyone is wearing masks correctly & social distancing. It’s clear that is not important, even to management, when they fail to set an example in following those protocols. Knowing that if I get sick, I am most worried about getting my parents sick who are in the age group that is most at-risk.” 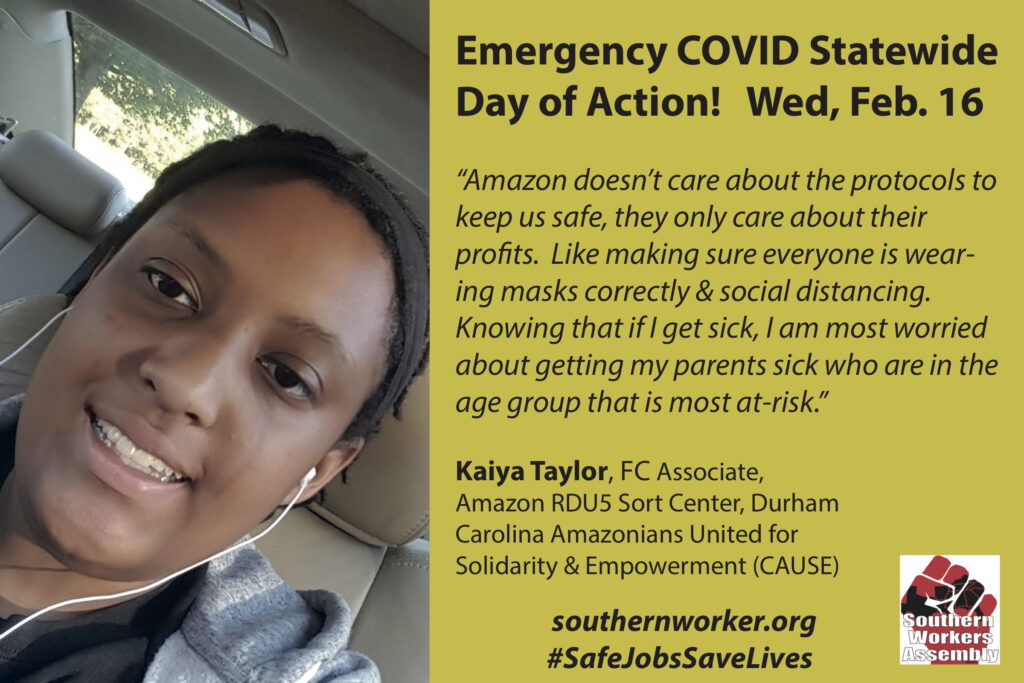 Members of the Southern Workers Assembly including Amazon, meatpacking, mental health, nurse, bus drivers, university workers, sanitation, water department and other workers in every corner of the state, from Asheville to Fayetteville, took action behind a unified set of demands. Thousands of workers wore stickers to work that said “hazard pay now” and “Safe Jobs Save Lives”. Others rallied in front of their workplace.

At Mission Hospital in Asheville, nurses also participated in a lunch time press conference, demanding Dobson extend the Emergency Temporary Standard, do timely and thorough investigations into safety complaints, as well as safe staffing. The hospital was bought out by a national chain, Healthcare Corporation of America, a few years ago, which spawned nurses to organize into the National Nurses United union.

“At Mission Hospital far too many colleagues of mine have been out sick with COVID,” stated Claire Siegel, Registered Nurse. “HCA’s failure to comply with state health and safety laws, the locking up and hiding of PPE, and their unsafe staffing have all contributed to a work environment where catching COVID is a constant concern for the nurses. I’m proud to be active in my union advocating for safer standards at Mission Hospital and across the state.” The union filed a series of complaints with the state Occupational Safety and Health Administration which resulted in an investigation over four months ago, with no decision. There have also been various violations of the ETS, including forced reuse of PPE. 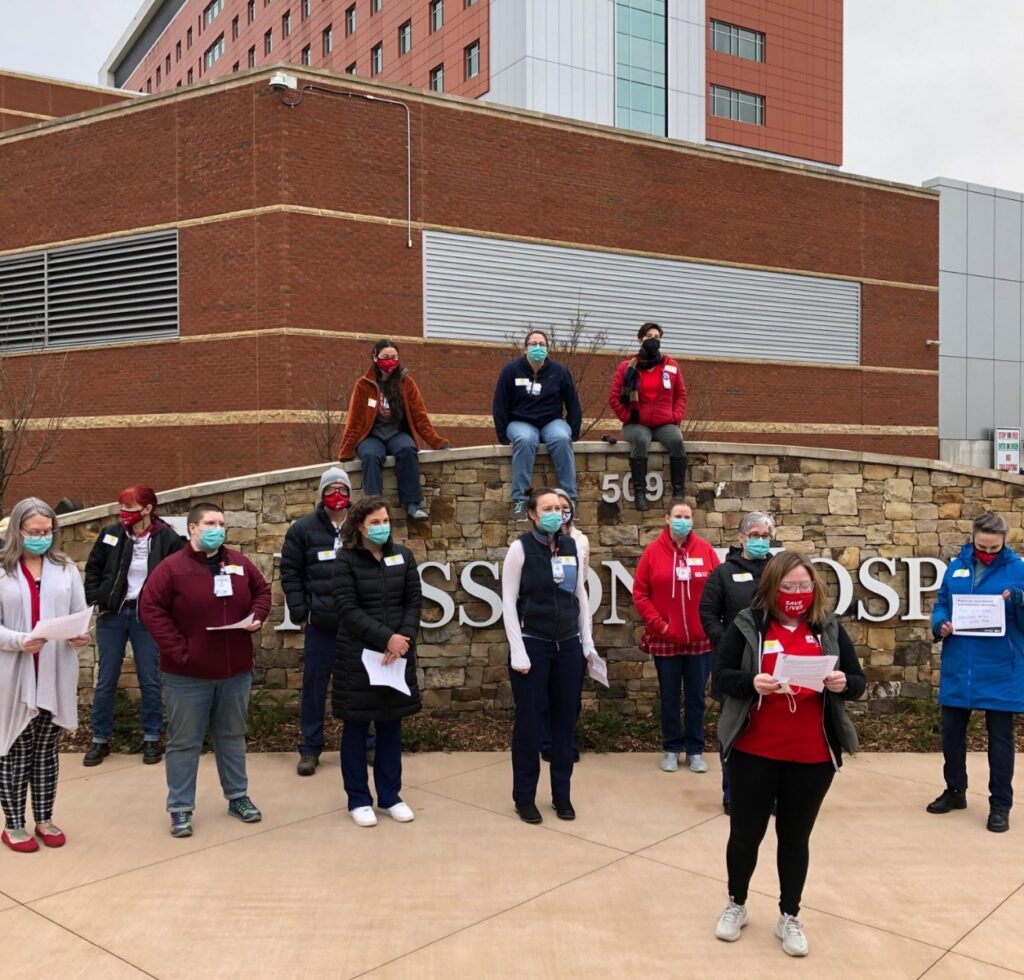 Down the street, Albert Maybin, president of the Amalgamated Transit Union Local 128, representing city bus drivers, lead a rally in the Pack Square, supported by the Western NC Workers Assembly. “Local management in Asheville are continuing to spend money keeping the public and the bus drivers supplied with masks that “they said” are least effective in protecting against COVID, state Maybin. He continued, “but they spent $0.00 for N-95 masks which are proven to be most effective. And, YES, we do deserve hazard pay!!” 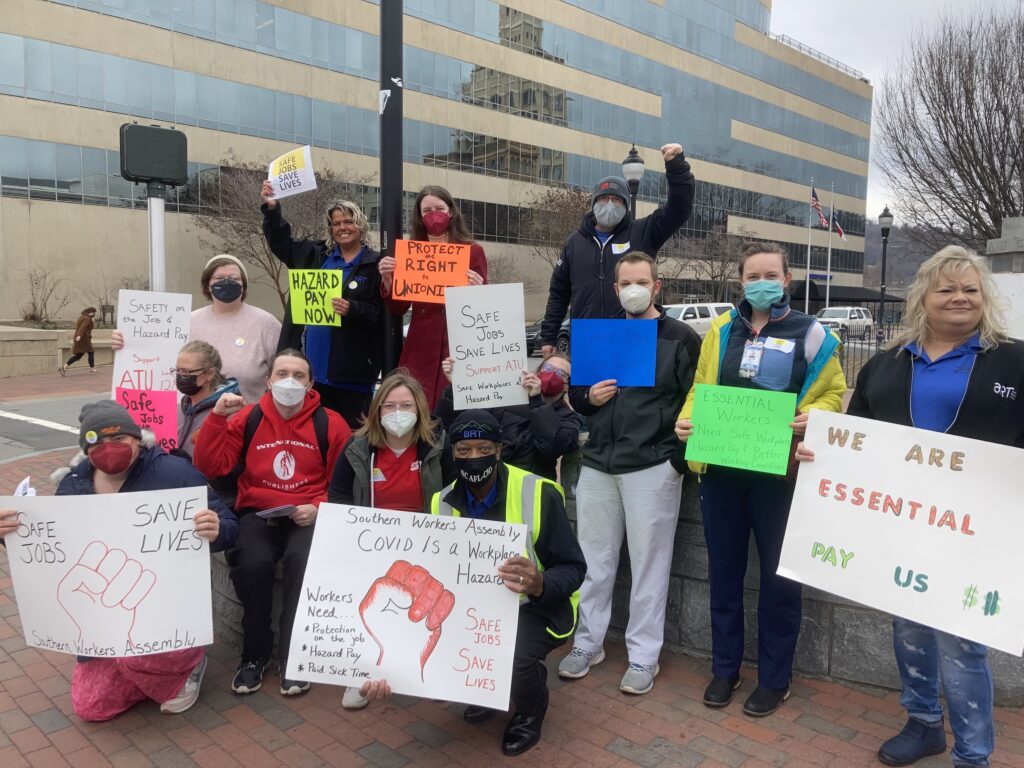 On the other side of the state, in Fayetteville, out front of Valley Proteins meat rendering facility workers set up a union outreach tent and distributed fliers to workers entering the plant. Workers there have been building the Valley Protein Blue Collar Workers Organizing Committee, and affiliate of UE Local 150, for almost two years now. Most recently, workers there rallied after the tragic death of two of their co-workers down in a meat pit after being exposed to high levels of Hydrogen Sulfide Gas. The union members have documented that no PPE or oxygen monitors were present at the time of the accident. NCDOL is still in an on-going investigation, nearly four months after the deaths.

“The COVID situation was not taken seriously at all by Valley Protein, it was swept under the rug until 3 of the management caught COVID,” stated Ellsworth Whitfield, Raw Driver, a member of the UE Local 150 organizing committee at Valley Proteins Inc. in Fayetteville. “They put plexiglass up in the office when you talk to management. They were able to go home and get paid time off. When the plant workers and drivers tested positive they couldn’t go home. If they stayed home they weren’t paid and got written up.” 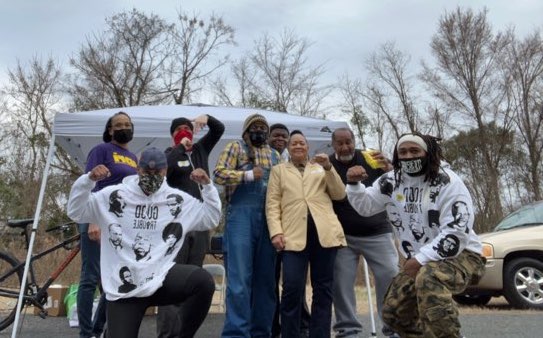 Workers at the state mental health facilities in the NC Department of Health and Human Services, at Central Regional Hospital in Butner, Caswell Center in Kinston, Longleaf Center in Wilson and O’berry Center and Cherry Hospital in Goldsboro participated in the action by wearing stickers on the job and hosting small lunch time rallies. These workers belong to the North Carolina Public Service Workers Union, UE Local 150 which has been on an on-going campaign for “safe staffing” in response to 2,300 out of the states 11,000 direct care positions being vacant. Many units have had to close down. Workers at Central Regional Hospital even reported that they are now serving only 295 patients, down from the facility’s pre-pandemic level of 380 patients. Many local hospitals don’t even try to admit patients there anymore, often leaving them languishing for long hours in Emergency Rooms without proper care. 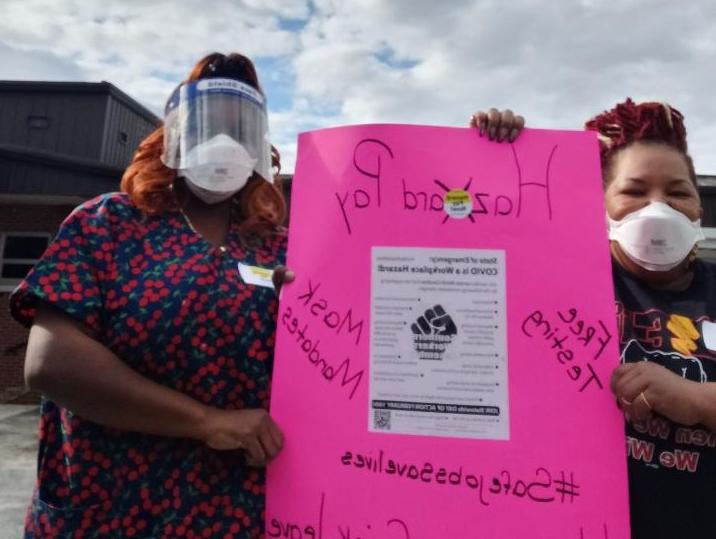 “COVID has been very hard on us at Central Regional Hospital. We have lost a ton of staff because it’s too stressful,” stated, Debra Hartman, RN. Hartman continued, “now we get mandated to work on your days off especially weekends due to short staffing. We need safe staffing and hazard pay to retain staff.”

“Management doesn’t want us to know information to be safe. They are not telling us anything. They don’t even want to give us hazard pay. So many workers are quitting and we are changing to 12 hour shifts just to cover the evening shift,” stated Phyllis Jones, Youth Program Education Assistant 1, Murdoch Developmental Center, steward of UE150 in Butner, NC. 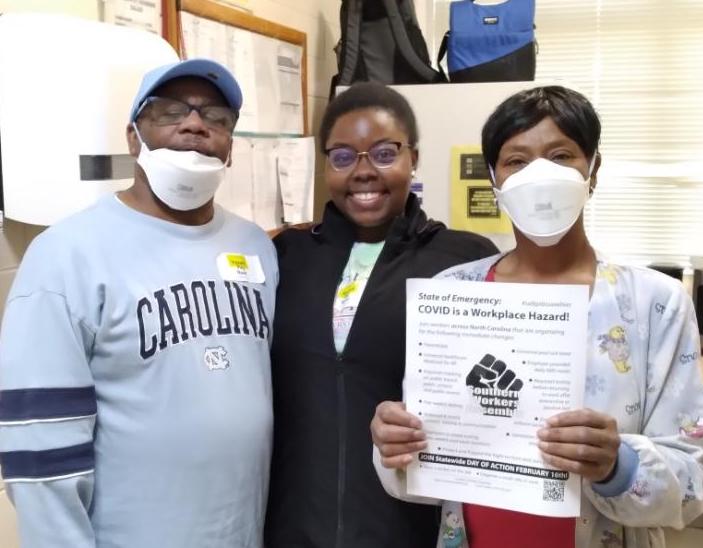 “My issue with COVID is that many healthcare workers are having to work long hours and also in areas they know nothing about. Workers are sick and tired of doing this day-in and day-out for over 2 years and not getting compensated. This is why we need hazard pay now!” demanded William Young, a Cook 2 at Cherry Hospital where he serves as president of the UE Local 150 Goldsboro chapter. 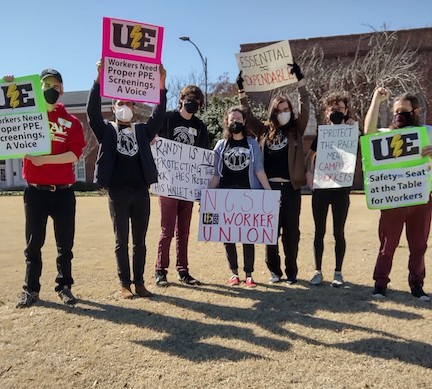 In the state’s capitol in Raleigh, graduate workers at the NC State University rallied in front of Chancellor Randy Woodson’s office demanding resumption of online classes, as well as other safety measures.

“I’m happy that NC State University offers free PCR tests to us whenever we want them, but it doesn’t justify the university administrators seeing that a wave of a hyper-contagious, vaccine-resistant COVID variant spread across the country and still forcing people to teach and go to class in person,” stated Alex Wall, Lab Technician, Biological Sciences. Alex, who is a leader of the UE150 organizing committee, continued, “It’s so frustrating that after nearly 2 years of this, the administrators’ response is to tell us to ‘grin and bear it’ while they work from home and don’t actually risk exposure to come to work.” 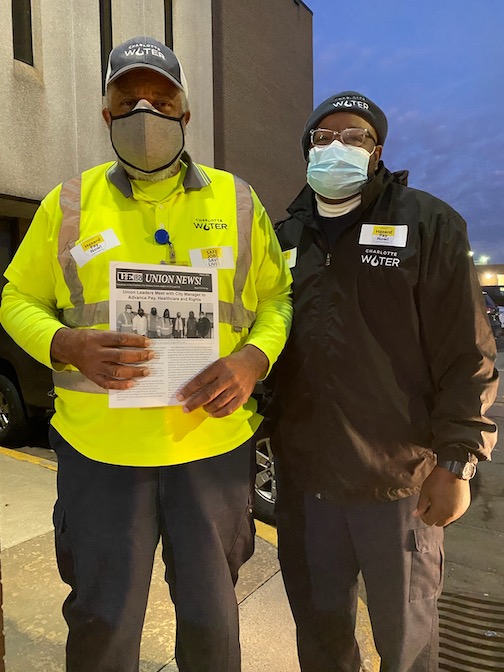 UE Local 150 members that are municipal workers in the City of Charlotte and manufacturing workers at Cummins Rocky Mount Cummins Diesel Engine Plant also participated heavily in the sticker day action. Members of the National Domestic Workers Alliance We Dream in Black also wore stickers in Charlotte and Durham.

“On the job safety is imperative for the healthcare worker and their client or patient,” stated Shara Clark, National Domestic Workers Alliance-We Dream in Black in Charlotte. Clark added that, “in healthcare it is the responsibility of the facility or healthcare worker to ensure safety for themselves and their client or patient. Proper PPE helps to cut down on the risk of cross-contamination, Covid19, and other bacterial infections.”

Members of NC Raise Up, the Fight for $15 also participated in the days events.

“Management basically avoided addressing the risk of night shift being exposed to COVID,” stated Nina Bailey, Bojangles worker, Fight for $15 and a Union member in Burnsville. “Our safety is one of the reasons we are striking.”

William Simpson, a housekeeper and member of Fight for $15 and a Union in Durham stated, “our lives are the ones that are on the line. We regularly have to go into those contact rooms. Our employers refuse to give us hazard pay or take our well being into consideration” –

Kenton Gerald, a worker Biscuitville and member of Raise Up/Fight for $15 & a Union in Durham added that “it’s hard to survive on these low wages without hazard pay or even proper PPE to keep safe.”

To view all photos from the actions, visit: https://www.facebook.com/SouthernWorkersAssembly

Workers are all uniting to demand that our bosses and the government grant the following: