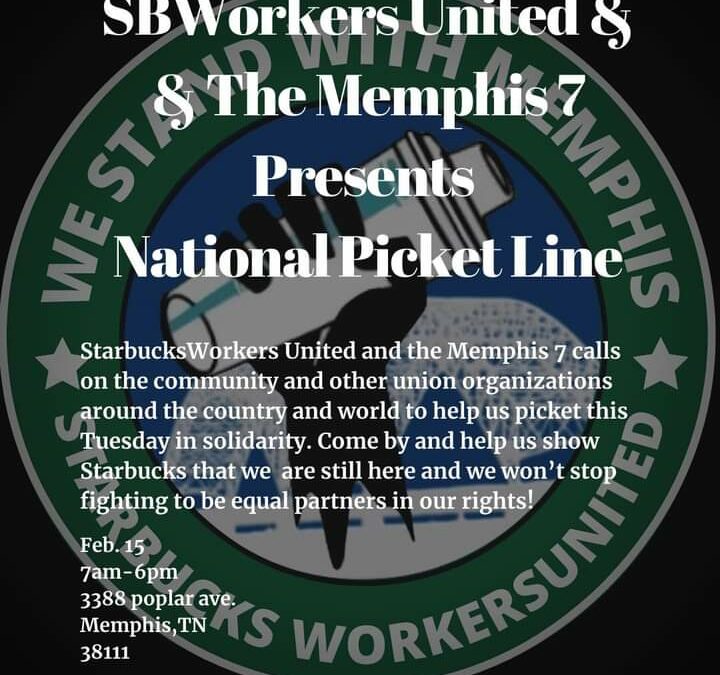 The Southern Workers Assembly sends our solidarity with the Memphis 7 and all Starbucks workers organizing for rights, safety, and power on the job. We join the calls for Starbucks to immediately rehire these workers and stop their racist union busting campaign. Actions are being organized on Tuesday, February 15 across the South and the U.S. at stores where Starbucks workers are organizing in solidarity with the Memphis 7. We urge you to join an action near you.

On February 8, seven workers at the Popular and Highland Starbucks in Memphis, Tennessee were fired – approximately 35% of the store’s workforce. The group of fired workers were mostly Black and brown workers, and consisted of the entirety of the organizing committee at the store.

The workers at the Memphis store had announced that they were joining the growing movement of Starbucks workers organizing a union at the coffee giant on January 17, 2022 – Dr. Martin Luther King, Jr. Day. They noted the city’s significance as the place where Dr. King was assassinated in April 1968 fighting alongside striking sanitation workers, joining together the civil rights and labor movements.

To date, the firing of these seven workers in Memphis is the most aggressive union busting activity that Starbucks has engaged in, as upwards of 80+ stores across the country have declared that they are organizing with Starbucks Workers United. It is no surprise that Starbucks decided to take this anti-union action against majority Black and brown workers at a store located in the right to work U.S. South.

The emergence of the broader Starbucks workers organizing campaign is a welcomed development in the midst of an increasingly combative mood of workers organizing, like at Amazon and other global corporations. The Southern Workers Assembly has been engaged in a process of developing workers assemblies in numerous cities and across several industries in the South. The assemblies are the infrastructure to bring together workers organizing with the broader social justice movement, to support the development of workplace committees, and as the basis for building an independent workers movement in the South that can fight for power on the job and in our communities. We invite Starbucks and other workers in the South to join this growing movement to build local workers assemblies.

No to racist union-busting!