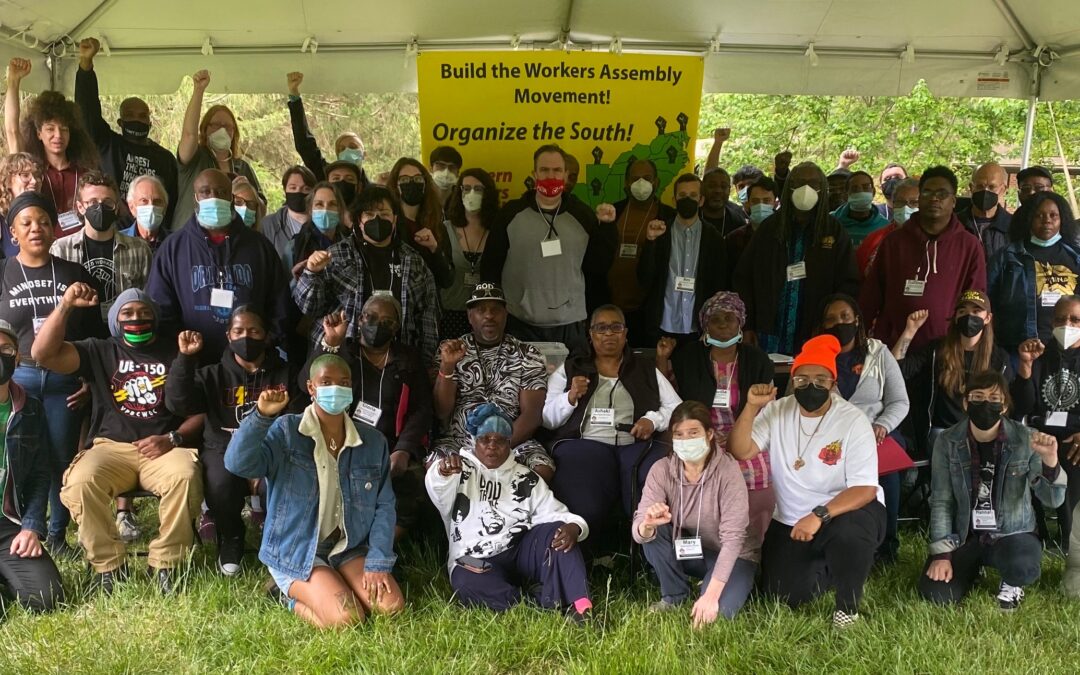 Over the last year, the network of areas building workers assemblies across the South has grown substantially to include nine different cities, the development of several industry based councils – including Amazon, healthcare, and education workers – and growing interest to develop assemblies in additional locations as well. The gathering in Durham was an effort to consolidate this growth, draw lessons from these experiences to inform the methodology of building workers assemblies to organize the unorganized and to develop worker cadre, and to collectively chart a course for our work going forward.

Workers who participated in the school came from a wide range of different sectors, including strong participation from Amazon workers, domestic, healthcare, education, local municipal, manufacturing, meatpacking and service industry workers. A major emphasis of the school was building Black worker leadership.

The school was rooted in an assessment of the current political period of both growing self-organization and activity among various sectors of the working class, as well as the growing danger of right wing reaction, and the role that workers assemblies in the U.S. South must play in relation to these and other developments.

In his opening orientation, Ajamu Dillahunt, member of the Southern Workers Assembly Coordinating Committee and a leader of Black Workers for Justice, noted: “We have to take advantage of this moment. As the Black Panther Party said in the 1960’s, we have to “Seize the Time” and build a rank and file led social movement unionism that organizes workplace committees that are connected to each through Workers Assemblies in multiple Southern cities.” 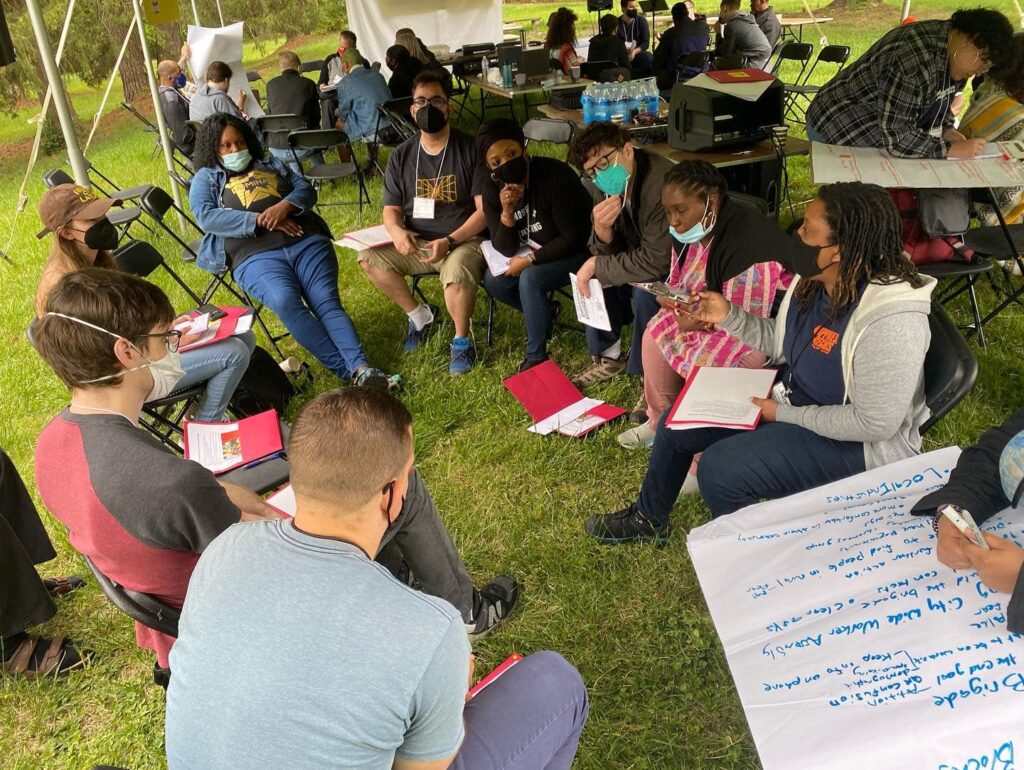 A main focus of the meeting was engaging the rank and file base of the assemblies in a discussion of a draft political program that could be the basis of broad unity and collective action in the months ahead. This program would help workers to see their workplace fights within a broader social movement struggle for power and justice.

In break-out groups, workers discussed their priorities for wages, benefits, housing, education, racism, gender oppression, labor rights, the environment, immigration, war and voting rights to contribute towards the development of such a program. There was a high level of unity around expanding labor union rights, including ending right-to-work (for less) laws, overturning bans on collective bargaining, and making union busting and captive audience meetings illegal.

From there, workers discussed plans to develop a unifying campaign that the various assemblies can implement together that can engage coworkers and leaflet other large workplaces across the South with these political demands. The hope is to develop a broad consciousness that we, as workers, have common needs and interests that are distinct from the owning class, and to engage wide layers of our class in ongoing and escalating activity to open a public struggle for power. The first stage of this campaign will lead up to the midterm elections in 2022, which will be an important battleground for the working class to raise its demands with employers and the politicians running for our votes.

There was a great deal of discussion throughout the weekend on the methodology of building workers assemblies, beginning first with small group discussions on the ‘Ten Building Blocks to Building a Workers Assembly’ {LINK – post to website}. These discussions offered a venue for workers at varying levels of developing their local assemblies to exchange and offer lessons from their experiences thus far.

One of the core tasks of the local workers assemblies is to identify workers and supporters who can establish a leaflet brigade, with the goal of leafleting at major workplaces in their area to agitate and make contacts with worker-activists.

Leaflet brigades that consistently and regularly engage workers from major workplaces in their geographic areas have proven to be a critical component in the developing workers assemblies, and some of those experiences were shared during the school. One particularly valuable lesson in the role of these brigades came from the Raleigh-Durham area. Last year, in the midst of the Bessemer, Alabama Amazon union election, brigades consistently leafletted the Amazon RDU1 Fulfillment Center, RDU5 Sortation Center, and the DRT1 Delivery station. This led to the formation of CAUSE (Carolina Amazonians United for Solidarity and Empowerment), an organization of rank-n-file Amazon workers across the area that was recently publicly announced.

“These are exciting times for the labor movement in the Triangle and Charlotte for Amazon employees and CAUSE members,” said Rev Ryan Brown, an RDU1 worker and leader of CAUSE. “The support that we’ve received from our coworkers and the Southern Workers Assembly has been overwhelmingly encouraging in our leaflet brigades and petition campaign. Amazon employees at CLT2, DRT1, RDU1, and RDU5 are anticipating much needed changes in our low wages and our grueling working conditions at their respective locations through CAUSE efforts.”

In the months since the initial brigade work at these locations, over 600 Amazon workers at these three warehouses have signed up for more information. A handful of work stoppages have also occurred in this time frame with workers taking action on their own responding to the leaflets, including about fifty third shift workers that walked off the job in mid-March, followed by the day shift being shut down the next day when management convened an all-worker meeting to hear from workers. Later, workers also refused to go back to work when celebrating the exit of a beloved co-worker. 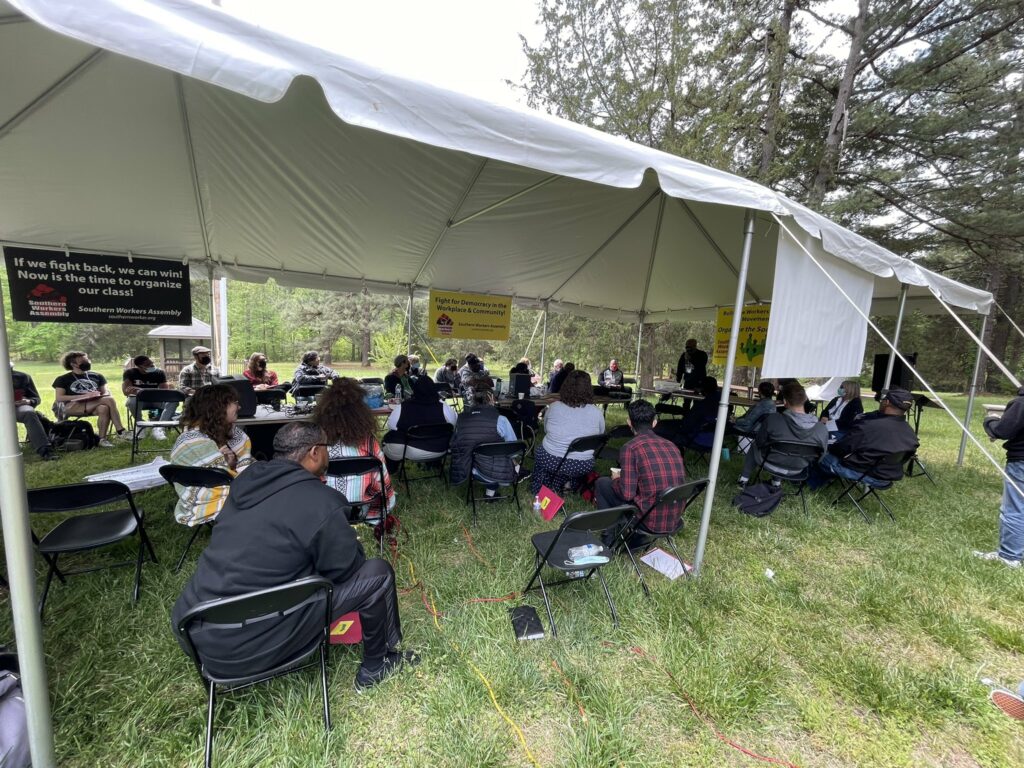 Workers Assembly’s Amazon Council that convened during the school, where Amazon workers from several Southern states shared reports on the organizing in their facilities, their efforts to engage other Amazon workers in their areas through leafleting brigades and other assembly work, and took up a discussion of deepening their coordination around raising demands and taking workplace actions. Another point during this discussion was how to connect Amazon workers together into networks with other workers organizing in different cities across the South.

“In New Orleans, we’re bringing together hospitality workers, film and television workers, Amazon workers, and teachers to form a local Workers Assembly,” Meg Maloney, an Amazon worker, shared during the session. “We’re training together, learning about our rights to concerted activity and workplace organizing, and sharing our experiences and learning from one another in the struggle. We’re stronger when we’re united in our workplaces and communities, together we will win!”

By the end of the weekend, workers from the local areas in attendance all met to discuss their efforts to build local worker assemblies in their areas and lay out immediate next steps based on the discussions throughout the weekend. Workers identified major employers in their area, and mapped out plans to continue supporting workplace committees, connected to a social movement framework to draw in more workers to our movement.

Deepening and expanding our work to Organize the South

In the weeks ahead, workers who participated in the school and the local workers assemblies will continue discussion to finalize the Southern Workers Program and a plan for action for the remainder of the year.

A particularly exciting outcome from the school was the establishment of new relationships with areas interested in building local workers assemblies. There was a strong delegation of educator activists from Richmond, Virginia who had recently won the first-ever local government union certification election for collective bargaining in their state. Members of the Richmond Association of Educators, and the Virginia Caucus of Rank-n-File Educators (VCORE) shared lessons about building rank-n-file worker engagement in the fight for the school board to recognize their union.

“We not only won back our right to collectively bargain, but won our union election with a 99% “yes” vote. And we did all this by revamping our union’s workplace organization, by training a new layer of union worksite leaders, and by agitating for a democratic, worker-led union with a class-struggle orientation,” Patrick Korte, a Richmond teacher and member of Richmond Association of Educations and VCORE shared duringthe school. “We have encouraged our union to adopt a class-wide perspective by practicing solidarity with striking Nabisco workers, with Starbucks workers struggling to unionize, and with all public sector workers fighting to win collective bargaining rights.”

By every measure, the school was a qualitative step forward in the development of workers assemblies as the infrastructure to anchor a rank and file led, independent workers movement that can organize the South.