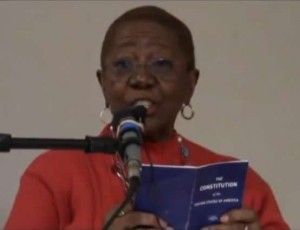 UNITED IS THE WAY!

A leader of postal worker retirees, co-founder of Post Office Women for Equal Rights – POWER  – and a legendary figure in the 1970 postal strike which won collective bargaining for postal workers, Eleanor G. Bailey is attending the Southern Workers Assembly in Charlotte, NC, that convenes at the same time as the Democratic National Convention. In the fall of 1970, Ms. Bailey led a successful campaign to stop the shut-down of two postal stations in Coop City in the northwest Bronx: home to 55,000 retirees, including many postal retirees. She issued the following statement to postal workers, and the entire labor movement, on the eve of the conventions:

We must get together! We’ve got to put down our individualism. We need to get in line with the rest of the labor movement who have found out that their strength is in one thing. Because Congress – people need to know – Congress “gave” us what we have and they will take it away unless we present a united front: they’ll take away everything we worked for, especially the right to collective bargaining.  This is under attack. So our thing needs to be: united is the way!

Something I’ve always been concerned about is why we haven’t gotten the Carriers, Mail Handlers, Clerks & Rural Carriers together – the management has played us against each other. This needs to be on the agenda today.

It was after the 1970 strike that I became Secretary of the union in New York State. After the strike was over, our five little union organizations got together and demanded the right to collective bargaining. The U.S. government decided just one would have collective bargaining. APWU merged with four other “fraternities” to become, first, National Postal Union (NPU), and then the Clerks and Motor Vehicle and Maintenance Crafts. We tried that for a while, then we became APWU. NPU was all of them together.

I think Charlotte could be a wake-up call for all of us there. We’ll have an opportunity to meet and talk, exchange ideas, because no one person has the know-it-all as to how to do this thing. Maybe when we leave we’ll have bits & pieces to put together when we get back….

Leadership needs to be in tune with members

The labor movement has stagnated because those who are in power are not in tune with what their co-workers or members are really about. I don’t think they really have informed their membership of what it took for them to get to the benefits they have now.

I came in in the mid-Sixties, right after President Kennedy signed equal pay for equal work, because women weren’t making the same salary as men. There were two lists: one for women and one for men. The only way women could get in is if a male relative in the Post Office passed away. We had to be able to do all the heavy work, and become carriers. Today there’s more women than men. We were taking the test and passing it.

I belong to Post Office Women for Equal Rights – POWER. We had to do this to get equal rights, and now we’re part of the APWU Constitution but there’s still some men who want to get rid of it, saying it’s not necessary, but we’re not equal yet…

Women had to deal with a lot of male resistance to coming into the Post Office. They didn’t even allow us into the lunch room. They kept us separate from the men. They actually had a rope to separate us – every day that rope got moved. Many men had common sense…

I give credit to Moe Biller (Metro Area Postal Union president in the 1960s and ‘70s) for the knowledge that women were going to be a major part of the Postal Service. He actually courted us. He was trying to figure ways to get us more involved. I went to him and the officers and staff because I was pissed since women were getting fired too often. Most women had to work midnights, and I felt the union wasn’t doing anything to help us or make things better. The male stewards were not so enthusiastic to help us.

In the sixties, the first thing we women did was join a union. Whether private sector or public sector. Women recognized this as protection. I went to the chief steward and balled him out for not doing something. He made me an ”appointed officer.” I was his magnet for the rest of the females.

We convinced Moe Biller, so he was on our side, that we needed to learn more about how to be active. Biller actually got us set up with the Labor College, so we could learn history, parliamentary procedure, how to be involved in a union meeting – all of these things. And he helped us be part of a very viral New York City group of labor union women. It was thrilling! We were the beginning of Coalition of Labor Union Women (CLUW) in NYC. We started first and then we branched out. That was the most fabulous thing in the world.

I say to labor union women: you need to get yourselves together. Women, join the brothers, it is time to go back to action. You’ve got to fight for what you want. You can’t just wait for someone else to do it. You’ve got to do it yourselves! Now is the time – they’re about to take everything you’ve gained, everything you have, and give it to private industry.

I feel IT’S TIME FOR ALL UNIONS TO BACK EACH OTHER! This is not the time for individual unions to attempt to do things in the old way: to attempt to stave off what’s happening to them by themselves. It’s time to show a total togetherness.
It’s time to support each other.

What we need to look at is what Congress is doing – because this is where we put the blame. They’re saying less government, but the government should be there as a vehicle to better things. They talk about cutting back, but how do you do that and create jobs? Where are you going to get the jobs to replace 200-300,000 postal workers?

We’ve got to learn to communicate with each other. We’ve got to stop & listen to each other so that we can make a united decision on which way to protect our livelihoods, and our futures. Because we can’t allow the labor movement to be destroyed! We’ve got to make our members understand that the union is there for their protection and the protection can only come from a united labor movement.

I feel our leadership needs to go back to the floor, back to where they came from. They need to find out what’s bugging people. They must do outreach to newer workers. This is why newer employees don’t join the union, because no one has gone to talk to them, or explained things, said why we need them. You’ve got to make people know they’re needed.

[In New York City,] the reason Jonathan and Tiffany won was because they went to the membership, individually and in groups. The membership wants to know who’s in charge. They want to say “I know her/him…” The commonality – that’s missing.

In 1970, the members were ready before the officers to go on strike. One of the shop stewards on the midnight shift at the NYC GPO where I worked came to me and said, Bailey, I think we’re going on strike. He said “would you guys support us?” I said, “Definitely, but I have to talk to my folks.” Fortunately I had excellent relationships with the folks on my tour.

I was scared, because we were going on strike against the U.S. government, and at that time we were subject to Taft Hartley and had no [legal] right to go on strike.

What I had to do was go buy me a heavy duty coat and boots, be out there at night to keep my folks from going in the building. They said as long as I was out there they would not cross the picket line. We had a bar in the middle of the block that was our first headquarters. Some of our people spent the night in that bar…

The main reason for the strike was that we got tired of going to Congress & begging for money. I remember once we bought a 100-pound pack of peanuts…. We always went to Congress to beg for the percentage raise. That time we took peanuts with us and gave them to the Federal employees. All of us were the same then – it only changed after the strike. And after that all Fed employees got a raise except us.

We need to highlight the Federal Employees Health Benefit Program – everyone who works for Federal Governmentt is in it. There’s nothing like it and no one wants out. The rightwingers in Congress just want to kill it. My co-workers don’t get it. Don’t you understand Congress is about to destroy your whole world?

For more from Eleanor G. Bailey, browse to: