Click HERE to sign and send a message to President Obama and Labor Secretary Solis telling them NO TAFT HARTLEY! HANDS OFF THE ILA’S RIGHT TO STRIKE! 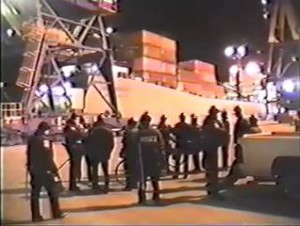 The Southern Workers Assembly Says No to Taft-Hartley!

The current negotiations between the International Longshoremen’s Association and the Maritime Alliance is critical for the future of the U.S. labor movement in terms of the role of government in the collective bargaining. In addition to the corporate strategy to get states to enact right-to-work laws, the call by the Florida Gov for Presdent Obama to impose Taft-Hartley placing restrictions on the ILA’s right to strike, is part of the corporate strategy to weaken the power of the labor movement and to keep it in a position of concessionary and austerity bargaining.

As U.S. and global corporations seek to maximize profits and maintain the dominance of the capitalist system, they must have the means to import and export raw materials, food products and finished goods to domestic and global markets. The longshore workers represent a key part of the global capitalist supply chain, and a decisive organized sector of the working class in the struggle against the abuses of the capitalist system against the workers.

Click HERE to sign and send a message to President Obama and Labor Secretary Solis telling them NO TAFT HARTLEY! HANDS OFF THE ILA’S RIGHT TO STRIKE!

The ILA represents 15,000 workers spanning from the ports on the East to the Gulf Coasts. They have been working under a concessionary contract for some time. Now the Maritime Alliance wants more concessions; one being the elimination of the “container royalty” for new hires. The container royalty was established in 1960 to compensate workers for job lost caused by automated container shipping.

This use of automation to replace workers and create massive unemployment should require corporations to compensate the workers as a minimum and basic human right.

The economic crisis that is raging among working people, is largely the result of this type of corporate greed seeking to force endless amounts of capital from the workers in the form of lower wages, the loss of jobs, higher premiums for benefits and the elimination of gains won over the years to create good paying jobs and to protect worker rights.

Labor unions supported your election with funds that came from our labor, along with hard work on the ground to turn out the vote.

If you impose Taft-Hartley against the ILA, it would represent the same anti-worker agenda that the Tea Party and other conservatives are promoting by their campaign to establish right-to-work legislation and cuts in social programs in states across the country, that benefit the 1% and severely hurts most of the 99%.

You must make it clear in your second term, that you support the rights and demands of working people against greedy corporations and anti-worker conservatives.

Sincerely yours,
(your signature here)